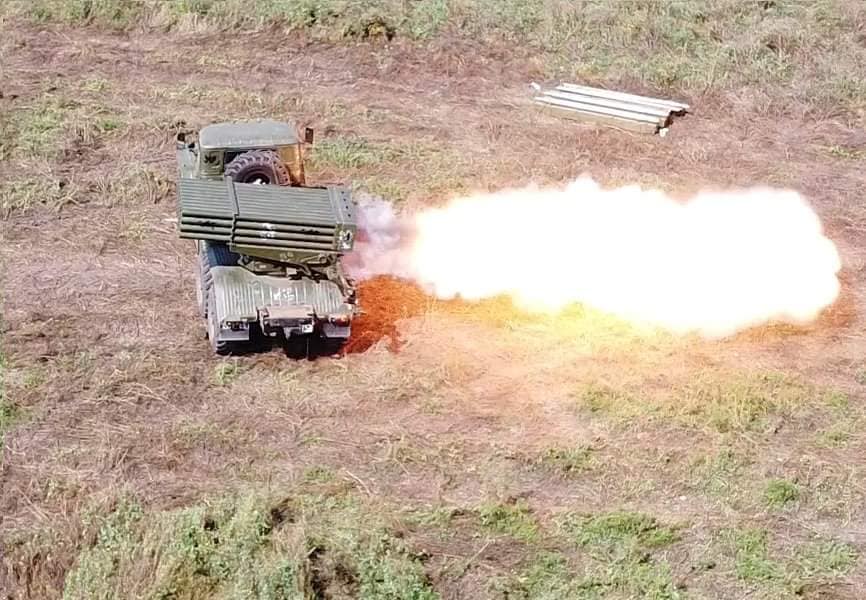 THE General Staff of the Armed Forces of Ukraine has provided its latest operational update on the ninety-eighth day of the Russian invasion of its country.

Ukraine’s Armed Forces provided its operational update on the Russian invasion on Wednesday, June 1 and noted that “in the Volyn and Polissya directions, units of the Armed Forces of the Republic of Belarus continue to perform tasks to strengthen the protection of the Ukrainian-Belarusian border in the Brest and Gomel regions.”

Alexander Štupun, a spokesman for the General Staff of the Armed Forces of Ukraine, said: “Measures are being taken to check the combat readiness of certain units and military units.”

“In the Siversky direction, Russian enemy units are conducting engineering equipment of positions in the areas of some settlements of the Bryansk region, at a distance of about 3 km from the State Border of Ukraine,” he said.

“In the Slobozhansky direction, the Russian enemy continued to focus its efforts on maintaining its positions and conducting reconnaissance.

“In the Kharkiv direction, Russian enemy fired from a barrel and jet artillery at the settlements of Oleksandrivka, Slatyne, and Tsyrkuny. It was struck by helicopters of the army aircraft in the areas of the settlements of Vesele and Chernov.

“In the Slovyansk direction, the Russian enemy regrouped its troops. As a result of the losses, the Dovhenkyi district took some units to the city of Izyum for reconstruction.

“In order to strengthen the protection and defence of logistics routes, it strengthened the group in the village of Kupyansk by moving the battalion tactical group. It conducted reconnaissance of the positions of our troops with the help of the Orlan-10 UAV in the areas of Izyum, Pervomaisky and Velyka Komyshuvakha.”

He added: “In the Donetsk direction, the Russian aggressor’s units, with the support of the air force, are focusing their efforts on conducting offensive operations.

“In order to inflict losses and deplete the personnel of our troops, Russian enemy fires along the line of contact from mortars, artillery and multiple rocket launchers. Repaired the railway bridge crossing in the area of ​​the settlement of Kupyansk to restore the logistics supply of the railway branch Kupyansk – Lyman.

“In the Lyman direction, the Russian enemy reinforced units and regrouped them. With the support of Ka-52 helicopters, the offensive is in the direction of the Lyman -Stary Karavan, and the fighting continues.”

“In the Sievierodonetsk direction, the Russian aggressor carried out assault operations in the northern, southern and eastern districts of the city of Severodonetsk,” he said. It was reported on Tuesday, May 31, that Russia’s military had captured half of Severodonetsk.

He continued: “In the Bakhmut direction, the Russian enemy is trying to oust units of our troops from their positions in the Belogorovka and Vrubivka districts. It used to assault army aircraft in the settlements of Komyshuvakha, Berestov and Nyrkove.

“In the Zaporizhzhia direction, the Russian enemy carried out engineering work to improve the fortifications of the second line of defence. He relocated to the area of ​​Vasylivka settlement to the T-62 tank battalion and to the motorized rifle battalion.

“In the Avdiivka, Kurakhivka and Novopavlivka directions, the Russian enemy holds its occupied positions, inflicting fire damage with mortars and artillery.

“In the South Buh direction, the Russian enemy’s main efforts are focused on maintaining the occupied positions and creating additional lines of defence. In the areas of the settlements of Mykolayivka, Novopavlivske and Shyroke, it carried out massive shelling from multiple rocket launchers, artillery and mortars.

“In the waters of the Black and Azov Seas, ships of the Black Sea Fleet of the Russian federation continue to perform tasks to isolate the area of ​​hostilities and blockade shipping.

“The storm tore from the anchor 2 enemy naval mines. One was carried by the waves to the shores of Odesa, where it was neutralized by specialists of the Navy subversive team, the other was blown up by our soldiers just at sea.”

He added: “One carrier of naval-based cruise missiles of the “Caliber” type is ready to use missile weapons in the Black Sea.”

Štupun also said: “In the past 24hrs, nine enemy attacks have been repulsed in Donetsk and Luhansk, two tanks, thirteen artillery systems, eight armoured fighting vehicles and six enemy vehicles have been destroyed.

“In the South, in the Kherson and Mykolaiv oblasts, the losses of the Russian occupiers, in addition to military equipment, amounted to about seventy people.”