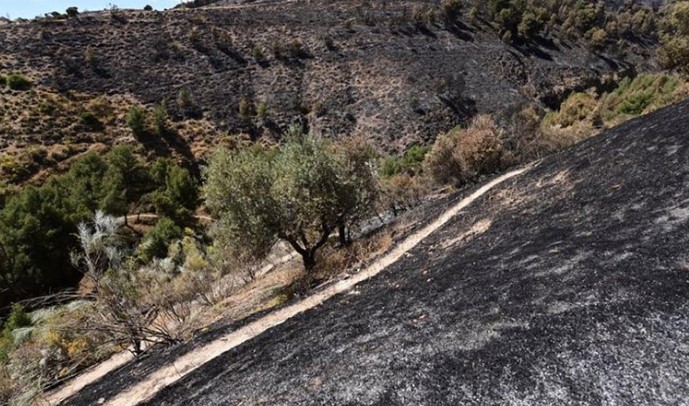 Image of the land destroyed by fire in in Cerro de San Miguel. Credit: [email protected]

A formal request will be made by the Junta de Andalucia for the central government to declare a disaster zone in Cerro de San Miguel.

Carmen Crespo, the Andalucian Minister of Agriculture, Livestock, Fisheries and Sustainable Development, released a statement this Thursday, June 2, regarding the forest fire in the Cerro de San Miguel area of Granada province.

The minister stated that once the fire was extinguished, she would send a formal request from the Junta de Andalucia to the central government next Tuesday, June 7, to declare the burned area as affected by a civil protection emergency.

Ms Crespo personally visited  Cerro de San Miguel to witness the damage first-hand. She said that with the declaration as a disaster zone, “those affected could benefit from aid that would contribute to the recovery of an emblematic area of ​​Granada”.

She explained that the Archdiocese of Granada, which manages the historic Sacromonte Abbey located on Cerro de San Miguel, also agrees with the request for the Council of Ministers to declare the destroyed land to be a disaster zone.

“Last Tuesday, during a visit to the affected area, we already valued the possibility of requesting this declaration, together with the representatives of the Sacromonte Abbey Foundation”, Ms Crespo said. She took the opportunity to highlight the excellent work carried out by the Infoca Plan.

“Thanks to the effective response of Infoca, in coordination with other emergency bodies, greater evils have been avoided”, assured the minister. Her appreciation also went to the Granada firefighters, Civil Protection, and the State Security Forces and Bodies.

Since last Sunday, May 29, until this Thursday, June 2, a total of 335 Infoca personnel, eleven aerial means, and 18 vehicles have participated in the extinction work. This included 14 fire engines and two water tenders.

An estimation places the damage at some 172 hectares burned by the blaze, of which about 46 hectares are trees, and another 126 of scrubland, most of which is privately owned land.