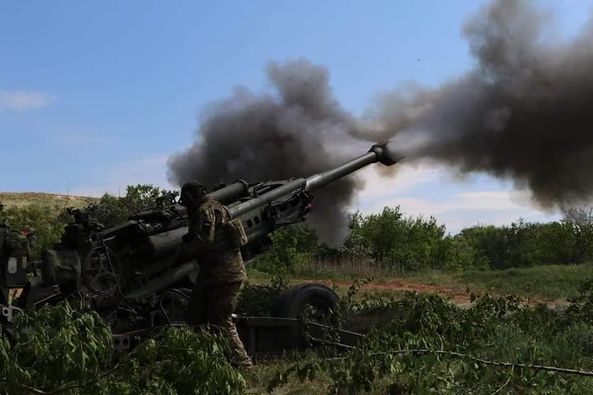 THE General Staff of the Armed Forces of Ukraine has provided its latest operational update on the one-hundredth day of attacks from Russian soldiers on its country.

Ukraine’s Armed Forces provided its operational update on the Russian attacks on Friday, June 3 on “the hundredth (100) day of the heroic resistance of the Ukrainian people against Russian military invasion” and noted that “Russian soldiers are demoralised due to the constant postponement of their rotation, which has led ” to the refusal of personnel to participate in hostilities.”

Alexander Štupun, a spokesman for the General Staff of the Armed Forces of Ukraine, then noted Russian combat losses: “Over the past day, five enemy attacks were repelled in the Donetsk and Luhansk directions, five tanks, three artillery systems, and two armoured combat vehicles were destroyed.

Štupun then gave an update on the latest activities of Putin’s army in Ukraine.

“In the Volyn and Polissya directions, the main efforts of the armed forces of the Republic of Belarus are focused on strengthening the protection of the state border.

“At the same time, there is a rotation of special forces in the border areas with Ukraine. During the inspection of the combat readiness of the armed forces of the Republic of Belarus, a meeting of communication specialists and engineering and technical staff was held.

“The threat of missile strikes from the territory of the Republic of Belarus remains,” he said.

“The Russian enemy did not take active action in the Siversky direction. It fired a missile at civilian infrastructure in the Hudovo district of Sumy oblast. Also in the Sumy region, the enemy fired on the areas of Bachivsk, Khodyne and Slavgorod.

“In the Slobozhansky direction, Russian soldiers continues to prepare for the offensive. It replenishes stocks of material resources, weapons and equipment from the territory of the Russian Federation. In order to reduce the offensive potential of our troops, it fires from artillery and multiple rocket launchers.

“The Russian enemy did not take any active action in the Kharkiv direction. The main efforts are focused on deterring the actions of the Defense Forces of Ukraine. The Russian enemy fired on civilian infrastructure in the areas of Bashkirovka, Mospino, Ruska Lozova, Pechenigy and Mykhailivka. It inflicted air strikes near Nove.

“In the Slovyansk direction, the Russian enemy is concentrating in particular on the engineering equipment of the positions. The shelling of civilian infrastructure was recorded in the districts of Dibrivny, Kurulka, Vernopillya, Chervona Polyana and others.

“Near Dovhenke, Russian soldiers launched air strikes with army aircraft. It carried out assault operations in the areas of the settlements of Bohorodychne and Dolyna, was unsuccessful, and withdrew after losses inflicted by units of the Defense Forces.

“In the Donetsk direction, the Russian occupiers continue artillery fire along the entire line of contact.

“In the Lyman direction, the Russian enemy fired on civilian infrastructure in the areas of the settlements of Yarova, Shchurove, Staryi Karavan and Raihorodok. It carried out assaults near Studenka, and the fighting continues.

“In the Siverodonetsk direction, Russian invaders continue to shell the positions of the Defense Forces and civilian infrastructure in the areas of the settlements of Siverodonetsk, Borivske, Ustynivka and Lysychansk. the Russian enemy assault aircraft launched air strikes near the Myrna Dolyna.

“In addition, in the area of ​​Mietolkino and Bilohorivka, the enemy tried to carry out assault operations, suffered losses, and retreated to previous positions.

“Fighting continues in the central part of Severodonetsk,” he said.

“In the Bakhmut direction, the Russian enemy fires in the areas of Pokrovske, New York, Zolote, Komyshuvakha, Mykolayivka, Berestove, Bilohorivka and Vrubivka. Near the latter, the occupiers conducted unsuccessful assault operations.

“With the assault forces and army aircraft, the Russian enemy launched air strikes on infrastructure near the Vidrodzhennia, Rotiv, Novoluhansk and Dolomtne.

“The Russian enemy did not conduct active hostilities in the Avdiivka, Kurakhiv, Novopavliv and Zaporizhzhia areas. It fired on civilian infrastructure in the areas of Kamyanka, Vesele, Mariinka, Novomykhailivka, Avdiivka, Pisky, and Zolota Nyva.

“It tried to engage in clashes and assault operations near Krasnohorivka and Poltavka with the help of separate units and sabotage and reconnaissance groups. It was unsuccessful, retreated to previous positions.

“During the day, the Russian enemy used mortars, artillery and rocket-propelled grenade launchers on civilian infrastructure in the areas of the settlements of Kavkaz, Lepetykha, Dmytrivka, Osokorivka, Blahodiyne, and Stepova Dolyna.

“In some areas of the Kryvyi Rih direction, the Russian enemy intensified air reconnaissance and attempted assault operations. It was repulsed and retreated to his former position.

He added: “In order to maintain the boundaries of the defence, Russian occupiers are strengthening their advanced positions by moving reserves to probable areas of deployment of units of the Defense Forces.

“Some units of the 150th Motorized Rifle Division of the 8th Combined Arms Army in the Popasna direction suffered significant losses, at least 50 per cent of the personnel, weapons and equipment,” he concluded.