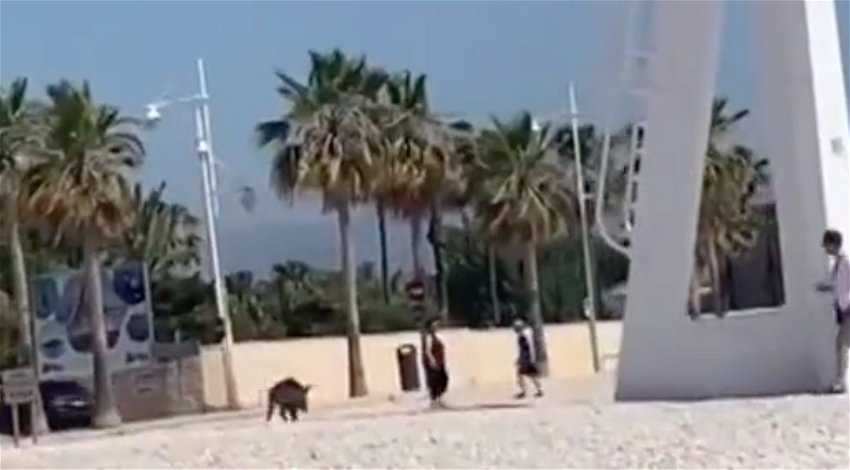 The 67-year-old woman was bitten by a wild boar, which subsequently fled the scene, on a beach in Alfaz del Pi, Alicante, Spain.

The wild boar was spotted on the Spanish beach at around 11.30 a.m when lifeguard staff saw two small boats approaching the bathing area of the beach, warning that a wild boar was about to appear from the water, explained Alan Bernabeu Dalli, coordinator of the lifeguard service, as reported by 20minutos.

The lifeguards began to warn the bathers but the animal came out of the sea in a very short space of time and lightly rammed a woman from Cuenca, who at the time was sitting on the shore with her feet in the water.

“This is how the wild boar escaped from the water on Albir beach this morning, causing a small injury to a 67-year-old woman,” posted Radio Benidorm alongside footage of the incident.

The lifeguards reported that the woman had reduced mobility due to a recent knee operation and the wild boar caused a small cut between 1 and 1.5 centimetres deep in one of her legs.

The lifeguards have healed and plugged the wound and believe that, at most, she should receive one or two stitches and a tetanus shot. A Basic Life Support (BLS) ambulance has taken her to the Alfaz health centre.

After the attack, the wild boar ran away at high speed and slipped into a nearby campsite, now in the municipality of Altea, where it did not cause any personal injuries or material damage.

Due to the large presence of children and adults inside the enclosure and due to the nervousness of the animal, it was finally shot by the local police of Altea to avoid risks.

The coordinator of the lifeguards described the scene as “almost comical” if it were not for the aggression against the swimmer and added that the injured woman is fine and has even taken what happened “as a joke”.

The tragic ending of the life of the wild boar follows similar reports from Monday, 25, April, when two wild boar piglets were slaughtered after reportedly wandering the streets of Barcelona in a panic for over two hours.