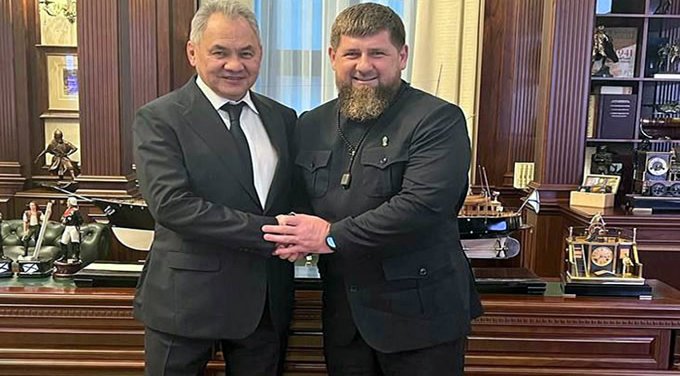 As the conflict in Ukraine entered its 100th day on, Friday, June 3, Ramzan Kadyrov, the Chechen leader, was in Moscow the previous day, Thursday, June 2, where he met with Sergei Shoigu, Russia’s Defense Minister. Pouring more fuel on the health situation fire was the fact that Vladimir Putin was not present.

Posting in his official Telegram account on Friday, Kadyrov revealed that the Russian offensive in Ukraine will be speeded up after their meeting, although he failed to specify exactly what this would entail. “New tasks to improve further tactics on the battlefield” had been detailed during Thursday’s meeting with Shoigu he said.

“The measures will significantly increase the efficiency of offensive manoeuvres, which will contribute to the faster conduct of special operations”, Kadyrov wrote in Telegram. As expected, in its daily briefing, the Russian Defence Ministry did not confirm Kadyrov’s claim, reported the Moscow Times.

Since Putin launched his ‘special operation’ in the former Soviet territory, Kadyrov – a former rebel turned Kremlin loyalist – has been one of his biggest supporters. His notorious Chechen paramilitary fighters have been in the thick of the conflict for the last three months.

When Russia pulled its forces out of Kyiv, the Chechen was very vocal, in direct opposition to any withdrawal. After regrouping its forces, Russia moved on to the Donbas region where they have since taken several key cities. Severodonetsk, in the Lugansk region, is currently at the heart of an intense battle.

The feared Chechen commander has been at the centre of numerous allegations made by international NGOs of potential war crimes and human rights abuse allegedly committed by his men in Ukraine.