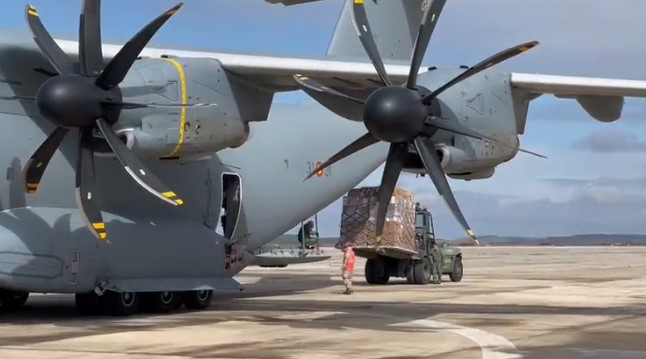 Image of aid for Ukraine being loaded. Credit: [email protected]

Ukrainian ambassador tells Spain the weapons they supplied are only ‘only enough for two hours of fighting’.

Serhii Pohoreltsev, the Ukrainian ambassador to Spain, declared this Friday, June 3, that the more than 200 tons of military aid that Spain has sent to his country are insufficient because they are ‘only enough for two hours of fighting”.

Speaking during a commemoration of 100 days since the conflict in Ukraine began, Pohoreltsev thanked the government of Spain for its “indisputable support”, although he commented: “We are grateful, but we cannot say that we are satisfied”, according to Europa Press.

Pohoreltsev specifically requested 155mm howitzers, 120mm mortars, and, above all, Leopard tanks. He saw the tanks as the main priority. “The issue is on the table and there is goodwill from the Spanish Government and the Ministry of Defence about sending instructors to teach the operation of these tanks”, ha said.

Then the ambassador reiterated: “There is a will, there is a possibility, but the important thing is the tanks. We are not asking for anything that Spain cannot provide”. He then made a point of repeating the results of a study carried out by the diplomatic mission, which stated that Spain registered “one of the lowest rates of aid to Ukraine in relation to its military budget”.

The ambassador confirmed that the conflict, 100 days after it began, has entered a “long-lasting war phase” in which Russia has already successfully occupied 20 per cent of the country and destroyed 30 per cent of its infrastructure.

Ukraine needs “more financial aid, and more weapons”, stressed the diplomat, to fight an enemy whose arsenal exceeds Ukrainian forces “by 20 to 1”. He highlighted that if Ukraine received the supplies it requested: “We could drive Russia out in a matter of weeks”.