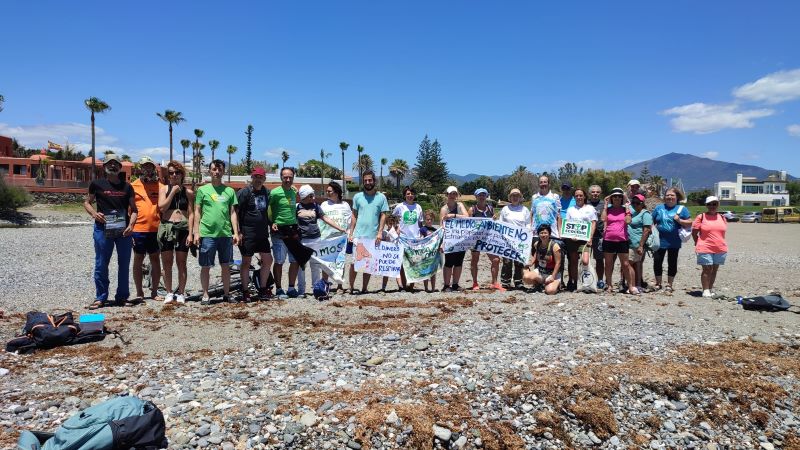 MORE than 50 people took part in a Walk for the Environment on Saturday June 4 for World Environment Day.

They followed a 13 kilometres route from Marbella to Guadalmina with the aim to raise awareness of the issues facing the coastline and the effects of climate change.

A group of around 35 people set off from the port at around 9.15am, with others joining along the way to show solidarity and to listen to the various short informative talks at several points on the route.

The last stretch from San Pedro to Guadalmina was very difficult, with very strong winds as well as a lack of paseo, but nevertheless around 25 people made it to the very end at the mouth of the river Guadalmina where they were also joined by another group who had walked all the way from Estepona.

The event, organised by Ecologistas en Acción Marbella in conjunction with Plastic Free Seas Worldwide, and supported by several other local organisations, was deemed a success by both organisers and participants, given the historic difficulty in Marbella and the Costa del Sol of motivating large numbers of people to speak up on environmental issues.

However, Angela Lafferty, spokesperson of both organisations commented: “With each event we do we see that there and more and more people willing to take action for the environment here in Marbella, and today with our 13km coastal walk we have given more visibility to the issues facing our local environment, among them the never-ending threat of construction, and of course climate change, which we can no longer deny is already here.

“The problem we have here in Marbella is that there is no holistic vision from the townhall on how to deal with the climatic and ecological emergency, and if their focus continues to be on achieving infinite growth, which we all know is impossible, then we are going to find ourselves extremely unprepared to mitigate and adapt to the effects of climate change.

“We need urgent action, but we are afraid that they will only begin to take real action when it’s too late.

For this reason, we are calling on all those who care about these issues, and live here in the Costa del Sol, to “Think Global but to Act Local”, to join their local environmental movement, as this is the only way we can achieve the change we need.”

Thank you for reading ‘More than 50 people took part in a Walk for the Environment’ and remember that all articles produced by Euro Weekly News may be accessed free of charge.