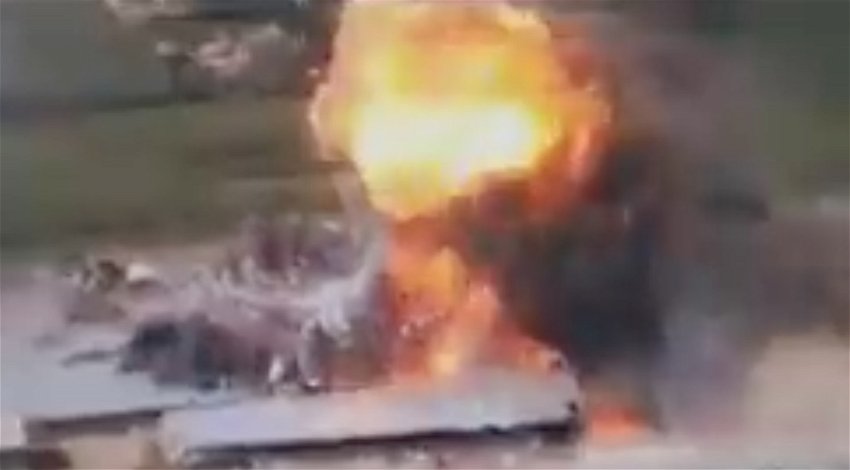 THE 44th Artillery Brigade of the Ukrainian Ground Forces confirmed that they had successfully bombed a Russian ammunition warehouse in the Pologovsky district of Ukraine.

According to the brigade, with the help of aerial reconnaissance by the 81st Airmobile Brigade of the Ukrainian Air Assault Forces, the attack on the Russian ammunition warehouse was in direct retaliation following shelling from Russian troops on three settlements in the area.

The brigade said Wednesday, June 8: “Artillerymen of the 44th OAbr of the Armed Forces of Ukraine, with the support of aerial reconnaissance of the 81st brigade of the 5th BTGR, bombed the accumulation of enemy equipment and ammunition in the Pologovsky district.”

“It is known that Russian troops fired at three settlements in the Pologovsky district. Enemy shells hit Gulyaipole, the villages of Dobropolye and Upper Tersa.

“Earlier, the Russian military left some positions in the Melitopol and Vasilyevsky regions. As it became known, they moved in the direction of Kherson region.”

The 44th Artillery Brigade of the Armed Forces of #Ukraine destroyed a large warehouse of occupiers' ammunition. Judging by the numerous flying missiles, #Russian MLRS systems also exploded as the entire depot went up in flames. pic.twitter.com/hsFhpS0Afn

The attack on the ammunition warehouse occurred hours before a military factory caught on fire in Russia.

The Zagorsk Optical-Mechanical Plant, which produces precision optical equipment for the Russian military, was seen burning in videos shared on social media.

The factory on fire is located around 80 minutes north of the Kremlin and continues the recent trend of spontaneous fires in Russia.

The JSC “ZOMZ” (Zagorsk Optical and Mechanical Plant) is a legendary enterprise of the Russian optical industry,” according to their website.

“Since 1935, it has been manufacturing observation equipment, medical ophthalmological equipment, laboratory instruments, and more recently, dosimetric equipment and safety equipment.”