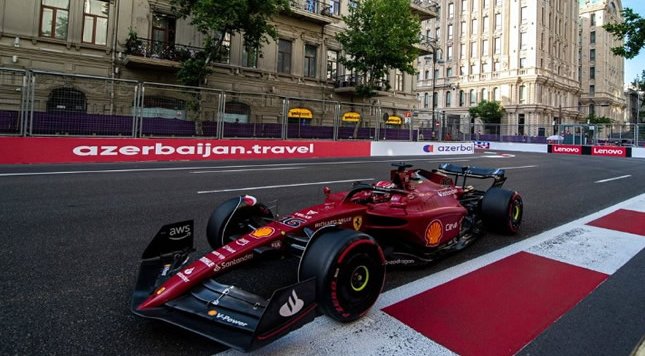 Image of Charles LeClerc in the Ferrari. Credit: [email protected]

Charles Leclerc will start his Ferrari in pole position in Baku for the Azerbaijan Grand Prix this Sunday, June 12.

Charles Leclerc will start in pole position for the second consecutive Azerbaijan Grand Prix in Baku later today, Sunday, June 12. The Ferrari driver clinched his sixth pole out of eight races so far this season, edging Sergio Perez in the Red Bull the slimmest margin of 0.282 seconds.

“All pole positions feel good, but this one I did not expect it because I thought Red Bull were stronger”, said the Frenchman after the session ended. “Especially Q1 and Q2, I struggled to see we were faster but then in Q3 I managed to do a good lap”, he added.

Carlos Sainz in the other Ferrari had been heading for pole, but a poor final lap saw him drop to fourth place on the starting grid. Reigning world champion Max Verstappen will start third after his teammate Perez pipped him by just 0.065 seconds.

With five starts from pole this season already, LeClerc is guilty of not having taken advantage of that. His only victory was in Australia, which placed him 46 points ahead of the Dutch champion. Since then though, Red Bull has won four in a row, and Verstappen is now nine points ahead at the top of the driver’s championship.

Mercedes once again struggled, with George Russell taking fifth, while his teammate Lewis Hamilton starts from seventh place. The pair are separated by the Alpha Tauri driver, Pierre Gasly.

Yuki Tsunoda in the other Alpha Tauri claimed eighth, with Sebastian Vettel in the Aston Martin, and Alpine’s Fernando Alonso rounding out the top 10. Lando Norris and Daniel Ricciardo in the two McLarens are in 11th and 12th respectively.