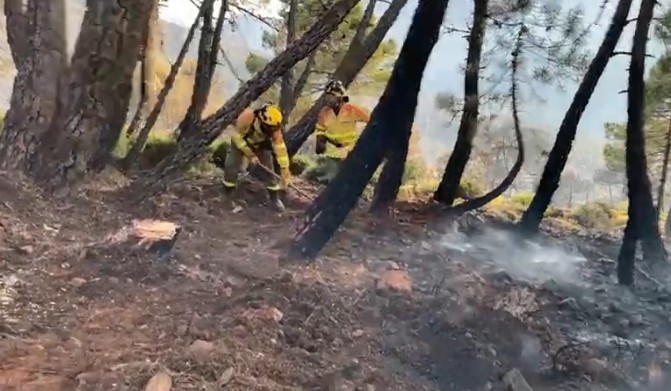 Plan Infoca has reported that hot spots from the Pujerra fire are being reignited by the strong winds and low humidity.

Plan Infoca has reported this afternoon, Sunday, June 12, that the east wind and the lack of humidity are reigniting several hot spots located within the perimeter of the Pujerra fire. This is once again affecting the neighbouring municipalities of Juzcar and Benahavis, where around 150 firefighters are tackling the fire that broke out last Wednesday, June 8.

According to the body, they are currently operating “5 air means, 150 ground crew, and 7 water carriers”, on a day in which “the wind and low humidity have revived the flames or hot spots within the perimeter’. The biggest culprit is the second aspect they added, which is around 30 per cent down in the vegetation, generating ‘constant reproductions’.

Gusts of wind have been blowing today with a speed reaching “between 30 and 40kph on the ridges”. That is in the upper part of the mountains, while in the valleys or low areas they have recorded ‘around 25 and 30kph’, which are only complicating the work of extinguishing the fire completely.

The very low relative humidity of the vegetation – around 25 to 30 per cent – is generating, together with the wind, ‘many reproductions within the perimeter that we thought were already dead’. These hot spots subsequently burst into flame again they indicated.

Right now, the objective is to consolidate the line of control of the fire, with the firefighters tackling it from both the ground and aerially. Weather forecasts currently indicate that the relative humidity is going to be very low. As explained by Plan Infoca, the situation is so bad that ‘most of the firefighters can hardly breathe’.

“What we are doing is consolidating the perimeter line that delimits the fire, that kilometric line that would be the fence that we put on it. We are acting with aerial and terrestrial means fundamentally on the entire surface’, a Plan Info spokesperson pointed out.