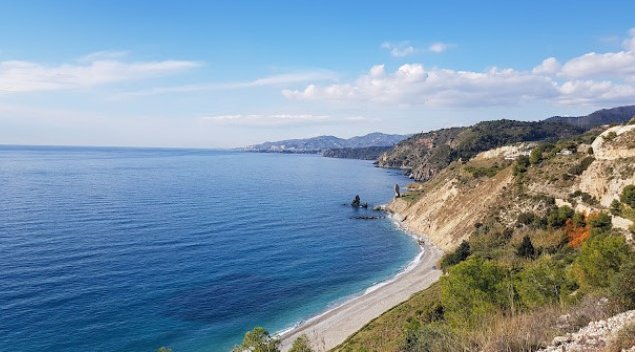 The Malaga municipality of Nerja has been given a black flag for its beaches by the environmental group Ecologists in Action.

The Black Flags 2022 report was published today, Tuesday, June 14, prepared by the environmental group, Ecologists in Action. For the first time since its launch in 2005, it includes the concession of one of them to the impact of sun creams. This distinction has been awarded to several beaches of Nerja in Malaga province.

Nerja has some beautiful beaches but due to the overcrowding of tourists, the semi-closed beaches of the coves of the Maro-Cerro Gordo Cliffs Natural Park have suffered. The report indicates that sun creams are an ‘important polluting agent’.

According to environmentalists, sunscreens that incorporate creams may contain substances such as endocrine disruptors, which constitute a significant danger to marine biodiversity.

However, in the face of these ‘ecological attacks’, neighbourhood movements arise, aware of the health of terrestrial, coastal, and marine ecosystems, ‘an impulse to which the different administrations turn a deaf ear”, assured Ecologists in Action, for which reason “the changes are hardly noticeable.

Discharges related to deficient sanitation and treatment systems, and invasive urban developments on the coast, are the main causes of the 48 Black Flags awarded by Ecologists in Action in 2022.

In Andalucia, in addition to Nerja, flags have been awarded for pollution to El Palmar and Mangueta in the Cadiz municipality of  Vejer.  The beach of La Rabita-El Pozuelo in Granada province, and the Huelva estuary were also included.

After an analysis of the 8,000km of Spanish coasts, a black flag has been awarded for pollution and another for mismanagement to each of the Spanish coastal provinces. The environmental organisation explained in its report that ‘the problems continue for another summer’.

Of the 48 black flags, 14 have been awarded for ‘discharges, deficiencies in the sanitation systems, and serious purification problems. Another 10 correspond to ‘the urbanisation of the coast that invades the maritime-terrestrial public domain’. These are the most common faults included this year.

Black flags were also given for ‘effects on biodiversity’ (5 black flags), the ‘dredging and extensions’ (4), ‘the development of coastal industrial zones’ (4), the erosion of the coastline (3), the accumulation of marine litter (3), and others such as ‘aquaculture, and ‘chemical pollution’ (4).

Despite the ‘slowness of the administrations’, there are some success stories thanks to citizen mobilisation. These include the legal initiatives spurred by social pressure in the face of the Mar Menor crisis in Murcia, or the improvements in the Barbate treatment plants in Cadiz, and Roquetas de Mar in Almeria.

In the case of the Mar Menor, although ‘some improvements have been observed due to social pressure’, there is still ‘a lot to do’ in this ecosystem that aims to be the first in Europe with legal personality. For this reason, it continues to receive a black flag .

Ana Aldarias, the spokeswoman for Ecologists in Action, pointed out that despite these advances, ‘we have to emphasise that these are actions that fall within the obligations of the administrations’, and that there is still ‘much to be done’.

A second environmental spokesman, Cristobal Lopez Pazo, added that this report ‘is a tool to make visible flagrant cases of pollution and environmental mismanagement of our coasts’. It exploits problems in the face of which the administrations ‘must act immediately to improve the health of ecosystems, the economy and the people themselves’, he concluded.