Three suspects questioned in connection with the Pujerra forest fire 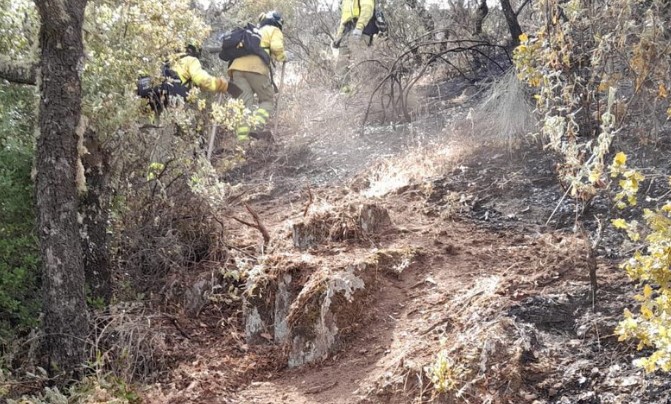 Statements have reportedly been taken from three suspects in connection with the forest fire in the Malaga municipality of Pujerra.

The Guardia Civil today, Tuesday, June 14, as reported by EFE, has detained three people and taken statements from them regarding their suspected involvement with the Pujerra forest fire. This incident started last Wednesday, June 8, in the Malaga municipality, and firefighters are still at the scene.

Sources close to the investigation informed EFE that a fourth person is scheduled to testify tomorrow, Wednesday, June 15, and that all the arrests have been made in order to take what the force calls a ‘technical detention’ statement. All three have since been released from custody, with none appearing in court.

According to the investigations carried out by the Environmental officers of the Forest Fire Investigation Brigade, the Pujerra fire was caused as a result of work with heavy machinery, carried out on the La Resinera farm, “in inappropriate circumstances for the existing conditions’.

Fernando Benitez Perez-Fajardo, the delegated prosecutor for the Environment of Malaga, indicated to EFE that ‘the fire does not bear, neither by its nature nor by its authorship, any relationship with the one that occurred last year in the same place’, pointing out that the other incident is under summary secrecy and subject to judicial control.

Members of the Guardia Civil’s Seprona unit confirmed this hypothesis after the practice of certain procedures, and this Monday, June 13, they took statements from those who participated in the work.

Plan Infoca firefighters are still working on the Pujerra blaze today, focusing on the eastern part of the fire where they are manually opening a line to strengthen the perimeter. ‘This work is hard and slow since the existing scrub is dense and large’, reported Infoca.