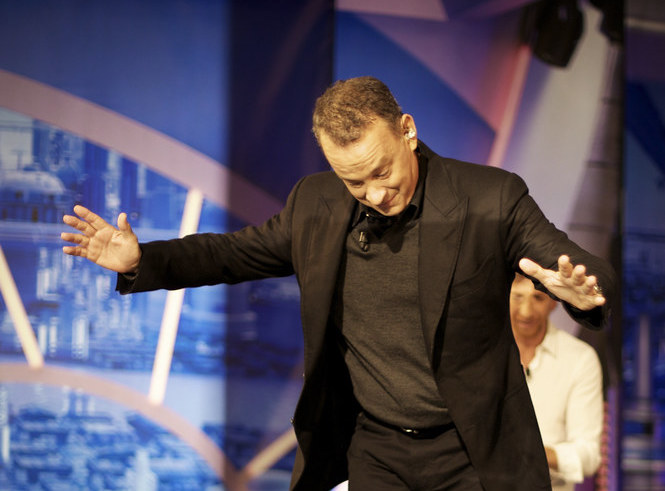 Image: "Tom Hanks vino a divertirse a El Hormiguero" by ElHormiguero is licensed under CC BY-ND 2.0.

THE site of Tom Hanks shaking at a recent film premiere has sparked concerns for the Hollywood actor’s health, a new report from the Daily Mail revealed.

Sixty-five-year-old Hollywood mega star Tom Hanks, who is currently promoting his latest movie ‘Elvis’ around the world, struggled to stop his arm from shaking during a recent trip to Australia, leading to concerns for his health.

In an exclusive report from the British tabloid newspaper, the Daily Mail revealed that the actor, who plays Elvis’ manager in the Baz Luhrmann biopic, tried to control his shaking arm after he shook hands with 30-year-old Austin Butler, who plays the pop icon, at the June 4 event in the city of Gold Coast.

The paper noted that after he shook hands with his co-star, Hanks placed “his left hand at the bottom of the microphone, below his right” in order to stop the visible shaking.

At one point, the tabloid news outlet said, the Toy Story star “attempted briefly to switch hands” and use his left hand to grip the microphone.

However, despite the distressing incident, it can likely be linked to the past health announcements from the actor, including one made on the Late Show with David Letterman back in 2013.

Hanks said at the time that he had been diagnosed with type 2 diabetes: “I went to the doctor, and he said, ‘You know those high blood sugar numbers you’ve been dealing with since you were 36? Well, you’ve graduated! You’ve got type 2 diabetes, young man’.”

“Well, I’m going to have type 2 diabetes then, because there is no way I can weigh [what I weighed] in high school,” he said with a laugh on Letterman’s show.

More recently, back in 2020, Tom Hanks was hospitalised after testing positive for Covid-19 and upon recovering, he noted that he had experienced “crippling crackling body aches” and even compared the pandemic to World War II as he urged Americans to do their part to ‘stop the spread’ of the virus.

“There was a sensibility [during World War II] that permeated all of society, which was, do your part,” Tom Hanks told Today. “We’re all in this together.”

Originally from the UK, Matthew is based on the Costa Blanca and is a web reporter for The Euro Weekly News covering international and Spanish national news. Got a news story you want to share? Then get in touch at editoria[email protected]