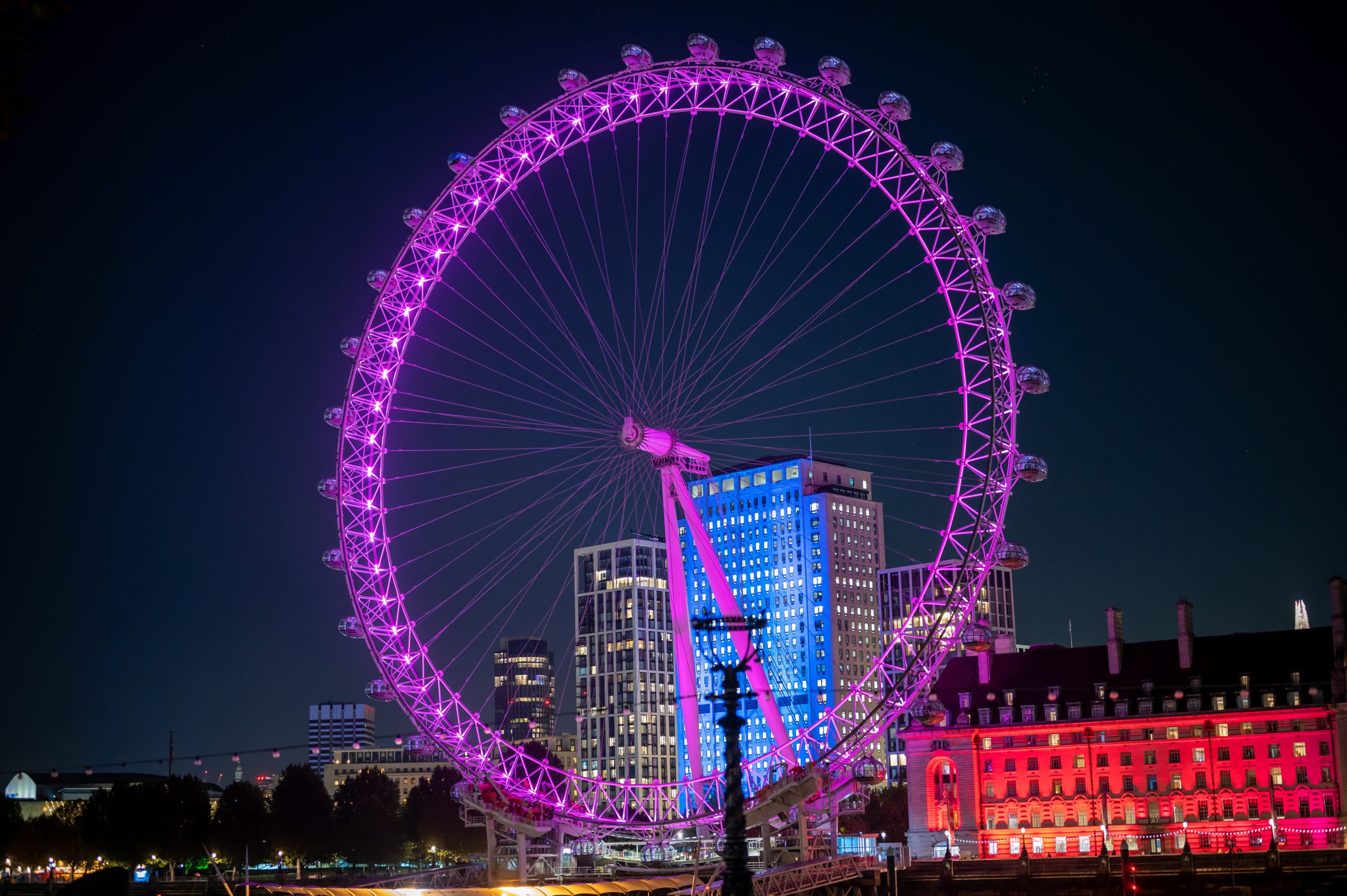 Oh London! The city of virtue, the city of sin. The city of glittering lights and of endless nights. The city of rolling money and glamorous fashion and enchanting styles.

My goodness! London has guided us all through the ages and through the millenniums. With its steam power revolution, with rebellious subcultures and transformative music scenes, with royal traditions and anarchical dispositions. The city of multicultural abundance and contradictions, of cockneys, slang and intelligentsia.

The home of the Big Ben is also the home of the curious, the visionaries, the excessive, the charismatic and the marvellous. The home where we feel at home. The home of finance exchanges and financial insanity.  A city where everything is golden – and if it ain’t golden then it is surely priced like gold.

When we look at you, London, we have stars in our eyes. We feel all the love, the lustre, and lust.

So if you love the weird and the wonderful, the glitz and the glamorous, and you live life on the limit(less) budget, then immerse yourself in the temptation. The Great Smoke is burning.

1.   An ode to the glitz and glamour of the “Swinging City” – The London Reign

If you’re on the busiest underground train in London chances are you’re travelling across the Big City on the blazing red Circle Line heading central. Or indeed, you boarded a typical black cab to avoid the rush-hour tube. Maybe you’re sitting atop of a fiery double decker admiring the Roman architecture from a vantage position. Whatever your means of transportations are, you’re probably getting off at Piccadilly Circus.

Well, if you are then go straight for a couple hundred metres, take a right and you’re on Picadilly’s main street. Right there, on one of the most iconic and busy streets of London you’ll find the most regal of nightclubs – The London Reign.

Fit for Kings and Queens, The London Reign is owner’s Ryan Bishti, is a club of exceptional excellence. The Club is part of his Cream Group which he founded in 2015. 15 years on and the Group encases tens of sensational, scrumptious and seductive clubs, events, and restaurants – The London Reign being just one of them.

Ryan Bishti’s London Reign Club will enchant and spellbind you. It will provide you with a night to remember by blending performance theatre with aerial displays of passions and glory. The decor is opulent and the LED lights are beguiling, all designed to transport the guest-list only clients into an era of glamour and perdition. Take a moment to admire the two-floors high interiors, and At The London Reign Club, flirt with a bottle of Magnum Armand de Brignac Ace of Spades Champagne or indulge in an exotically expensive bottle of Avion 44 Tequila – this is after all a temple of temptation. A shiny, electric temple of temptation!

It’s 4 in the morning and you’re probably stepping out of The Reign now, homebound. You have been nobly bewildered.

While many people have, over the past few years, lamented the gradual demise of London’s nightlife, there will always be great spots that keep the Soho and Mayfair area up as the greatest party quarter in the city.

If you take a stroll down Mayfair’s Conduit Street, just off Oxford Circus’ tourist-clad commotion, and far from the madding crowds there’s Sketch London, one of the most unique venues in the city, and it also has a strong claim to the title of being the most beautifully put together as well.

Originally established in 2003 by boundary-pushing Mourad Mazouz, it has quickly become one of London’s most “instagrammable” and influential entertainment locations.

At the location, split into various levels and diverse themed rooms, you will literally get lost in a world of fabulous fantasy.

Art is the driving force behind Sketch London. It is present not just in the overall ambience, but also in the food, the flooring, and the walls, even the bathrooms have their own artistic flair and importance. This all results in a location that is visually distinct from anywhere else in the city. You’ll just love adorning your social media page with pics and shots of Sketch! Talking about shots, get transported to worlds of exoticism and wonders with flower infused teas, three Michelin stars plates and quirky cocktails.

Under the moniker “Modern Magic,” and “Exciting Fantasy”  the owners and designers have imbued the rooms of this impressive three-story Georgian townhouse with a plethora of warm, golden, velvety tones and all possible adventures.

Living London through its magnificent history is possible at the Arts Club. The camera never lies, artists never fabricate, poets never romanticise, and The Arts Club never declines. Of course, only one of these statements is true – the most prominent members-only club in the heart of the city has been one of the most glorious meeting spots for men and women of the arts and sciences, for patrons and for the city’s most important, decadent, and curious minds.

Just around the corner from one of London’s busiest and most noble tube stops, Green Park, and a stone throw away from Her Majesty’s Queen Elizabeth Buckingham Palace, anybody that complies with the strict “smart” dress code and is comfortable with the £2,500 annual membership fee (plus the £2,000 joining fee), can join The Arts Club. Where you can have a wonderfully, delicate cocktail sitting on the same leather chair where Charles Dickens might have gotten his inspiration for Oliver Twist, Anthony Trollope would have written The Way We Live Now, or more recently, where Ronnie Wood imagined and felt Sympathy for the Devil.

Deep-dive into London’s creative, reactionary and cultural home – it’s definitely worth it.

Yeah, London is the city of art and pleasure, of royalty and scandals (and of Royal scandals). It’s the city that loves to eat too. The place where great chefs, day in and day out, feed hungry crowds of overworked locals and overzealous tourists.

The Office for National Statistics confirms that there are about 18,110 restaurants in London.

With this number in mind, how do you choose where to eat? Do you trust just any old and odd food guide that appears on your search engine? A book? Word of mouth? No, trust the “Unpretentious, the effortless and the elegant,” trust Ours, just a short walk away from South Kensington’s beautiful late 19th century underground station.

Ours is where tantalising, fresh and intensely aromatic tipples infuse with award-winning entertainment and delicious food, all to create the perfect blend of extraordinary sensations.

Bringing the outside indoors and a slice of European fine dining to the Swinging City, Ours is entrepreneur Ryan Bishti’s successful experimentation with haute-cuisine and delicate decor.

You’ll find that the New York-style brick walls and French-style rich velvets are adorned by a not-so-secret garden of greenery and flowers. In the thrust of the addiction, to the simple yet flavour-intense, ambrosial tasting-menu food, your evening is irrevocably going to flip from average to Ours-tanding.

5. Thinking Outside – The Box Soho

Our last stop on this tour of London’s lavish, opulent and ostentatious hospitality and nightlife spots brings us to thinking outside, and partying inside, The Box. Located in Soho’s “golden mile” between Ryan Bishti’s The Windmill and the acclaimed Soho House, the Box is a sumptuous paradise for wild perdition and decadent emotion.

The Box, which bills itself as “a theatre of varieties,” distinguishes itself from other upscale London clubs by placing great emphasis on circus-like live performances throughout thrilling and illustrious nights.

The Box’s infamous and controversial form of nocturnal entertainment has attracted everyone who is anyone in London (or the world), from royal “youngsters” Prince Harry and Princess Eugenie to supermodel Kate Moss, performer Harry Styles, and Harry Potter actress Emma Watson.

And Now for What Money Cannot Buy..

Happiness can definitely be served on a (metaphorical) shiny golden plate, and it can come in many forms. Success, on the other hand, requires hard work and dedication. To build a company out of just a simple idea and become one of the most acclaimed and successful personalities in the hospitality industry has taken people like Ryan Bishti time, devotion and efforts. It is thanks to visionary entrepreneurs like him that we are free to experience and live London like Kings and Queens.