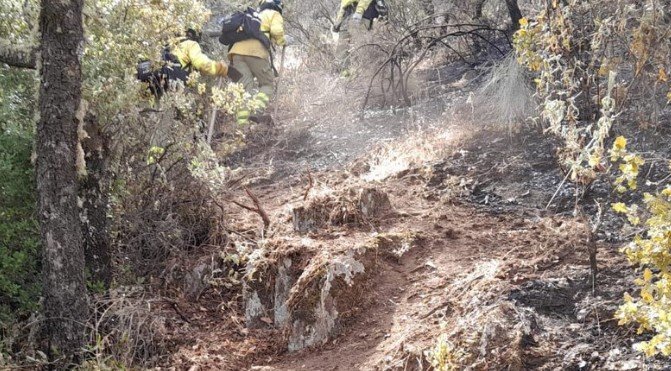 According to Plan Infoca, around 5,000 hectares of the Sierra Bermeja have been burned by the Pujerra forest fire.

It has now been one week since the forest fire started on the La Resinera estate in the Malaga municipality of Pujerra. According to the latest estimates by Plan Infoca, around 4,866 hectares of the Sierra Bermeja landscape have been burned. From this figure, the numerous green islands not affected by the flames must be subtracted.

The Guardia Civil has already taken statements from four individuals in connection with the blaze. It is suspected that the fire was ignited due to work that had been going on using heavy machinery in the area.

Plan Infoca has reported that there are still hot spots within the perimeter. This Thursday, June 16, an extinguishing helicopter had to be used again to damp down an area located on the edge of the fire. Infoca’s specialised forest firefighters also carried out surveillance work in the area to control any hot spots that might reignite.

Specifically, Infoca had four groups of forest firefighters, an operations technician, two Environment officers, and a fire engine on call throughout Thursday, carrying out control tasks on these small hot spots within the perimeter.

The fire crossed the road connecting the town of Pujerra with Ronda and the Costa del Sol at some points. As a result, motorists, motorcyclists, and cyclists who usually use this route now observed a vista of absolutely burned pine forests, black mountains, and the small chestnut islands that have resisted all attempts to burn them.

Almost everyone in the area agrees that the chestnut groves have been a great ally of the firefighting teams. This is proved by the fact that you can see the delimitation of the fire bordered by green chestnut trees that are in full bloom. “Last year the rain saved us and this year the chestnut trees”, said one of the neighbours.