Fuengirola Council to intensify traffic and speed controls this Summer 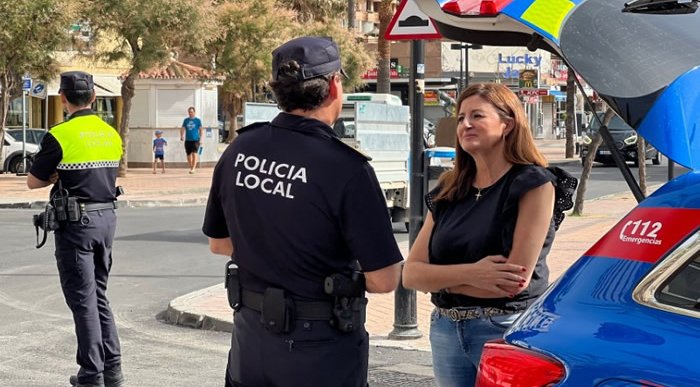 Image of Isabel Gonzalez, the Fuengirola Councillor for Mobility, with the Local Police. Credit: [email protected]

Traffic and speed controls will be intensified in the busiest parts of the Malaga town of Fuengirola this Summer.

As announced by Isabel Gonzalez, the Councillor for Mobility, this Thursday, June 16, Fuengirola Council is going to intensify traffic and speed control campaigns in the areas with the highest influx of public in the Malaga municipality.

Ms Gonzalez was accompanied by the Chief of the Local Police, Sergio Luna. Together, they explained that throughout these coming months, different measures will be put in place to control speed and improve road safety in the municipality.

These include the creation of flyovers at various points along the Paseo Maritimo, or on streets such as Maestra Angeles Aspiazu, Alcala Galiano, and Orquidea, among others. New speed gauges will also be installed at various points in the town for specific controls.

“We are going to intensify the traffic and speed control campaign for this summer season of 2022, which we have already been carrying out for several months”, assured the Councillor. She highlighted that “we expect a large influx of people in our town during the next few months. Therefore, we consider that it is important and necessary to strengthen speed and breathalyser controls”.

“These will be carried out in the areas with the greatest influx of public and vehicles, such as the Paseo Maritimo, as well as streets in neighbourhoods of the municipality where the gauges have given us data that require further follow-up”, she added.

Throughout recent months, the different security measures, or traffic controls, promoted by the municipal Mobility area, have provided a series of data that allow designing and intensifying -depending on the needs or incidents detected in the town – the different initiatives and campaigns to be launched.

Gonzalez explained that during the month of May, 5,157 vehicles were controlled, of which only 5 per cent were reported on different roads of the town for speeding.

In the case of alcohol controls, 121 tests have been carried out in recent weeks, of which only three were positive. Therefore, “although our objective would be for the infractions to be zero, they are good data, although we will continue working and implementing as many measures as necessary for correct road safety. But it is very important to respect the rules”, she emphasised.

She added that: “We have also verified with the gauges how, at this time, about eighty-nine per cent of the vehicles did not exceed 30kph”.

The Local Police Chief emphasised that: “Speeding, and driving under the influence of alcohol, are behind a high percentage of traffic accidents. Therefore, all the speed controls that we have been carrying out since the beginning of the year, plus those for breathalysers, play a very important role in road safety in the town”.

“We are talking about saving lives and ensuring the physical integrity of citizens. That is why we continue to carry them out, and they will intensify with that objective, concentrating them, mainly, in the areas with the highest influx of public and nightlife, as well as in neighbourhoods where we have data on vehicles that circulate at higher speeds”, Mr Luna concluded.