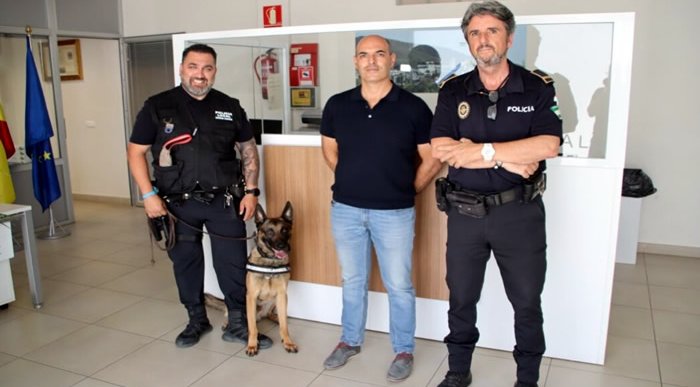 The Local Police force of the Malaga municipality of Alhaurin el Grande has a new Canine Unit.

As announced by Alhaurin el Grande Town Hall, the Malaga municipality’s Local Police force has a new member of staff that will make up the new Canine Unit. They have introduced Barri, a four-year-old Belgian Malinois shepherd dog who is trained to detect drugs and narcotics.

Barri is owned by an officer with the corresponding training as a Canine Guide, who has signed a collaboration agreement with Alhaurin el Grande Council for the transfer of the dog. He will be located in a designated place where Barri will have permanent contact with the guide.

In addition, an adapted police vehicle has been set up to transport the canine unit. The dog is trained to search for narcotics, with the aim of eradicating drug trafficking, especially in public places and establishments.

“Special emphasis will be placed in the vicinity of institutes, parks, and garden areas, as well as in those places where there is evidence of drug consumption or retail, such as leisure areas. This fulfils not only a sanctioning function but also a preventive and dissuasive one”, explained the Councillor for Security, Francisco Jose Perez in the presentation.

Among his functions, Barri will carry out patrols through the different areas of the municipality. He will also participate in the location of houses that are used for the cultivation and storage of narcotic substances and will accompany preventive controls.

The objective is to develop a preventive function in cultural and social events in the municipality. Likewise, Barri is trained, among many other things, to passively point out who is carrying some type of substance, facilitating the work of the officers.

Francisco Jose Perez expressed his satisfaction with the initiative, and thanked Israel Romero Garcia, the officer of the Canine Unit of the Local Police, “for his great work and collaboration in the training of our new member Barri”. He added that “the Local Police of Alhaurin el Grande works daily to make our municipality a safer place for our neighbours and visitors”.