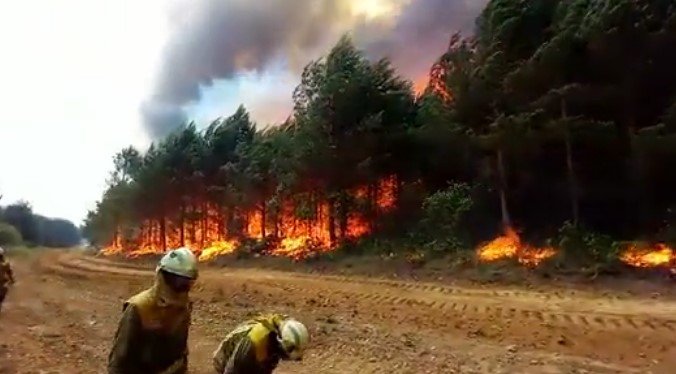 The huge forest fire that is raging in the Castilla y Leon region of Zamora continues to be tackled by both ground and air resources.

According to the Ministry of the Environment of the Castilla y Leon authorities today, Saturday, June 18, the fire that was raging in the Sierra de la Culebra reserve in Zamora continues to be battled by firefighters.

Nearly 20,000 hectares have already been charred, especially forest areas covered with pine trees, scrubland, and scrub. At one point, it even reached the vicinity of the Madrid-Galicia high-speed rail line after flames jumped the N-631 road near Val de Santa Maria. This resulted in the route between the Sanabria Alta Velocidad and Zamora stations being cut temporarily.

Residents of 14 municipalities had been evacuated from their homes yesterday, Friday, June 17. The good news today though was that residents from seven of those towns located further south of the area affected by the fire have already been able to return to their homes.

First thing this morning, after a hard night of fighting the fire on the ground, aerial means of extinction were incorporated, and, although the fire was still active, it was less virulent. It is not helped by the winds of almost 40km/h, with strong gusts of 50 to 70 km/h that have sprung up.

Friday had been a black day for the forest fire, due to a host of circumstances: a dry storm with strong electrical equipment and hardly any rainfall, temperatures of 40 degrees, low humidity. and strong winds.

In total, this Saturday, June 18, 919 soldiers and 308 media from the Military Emergency Unit (UME) have been working on fires across Spain, according to sources from the Ministry of Defence.