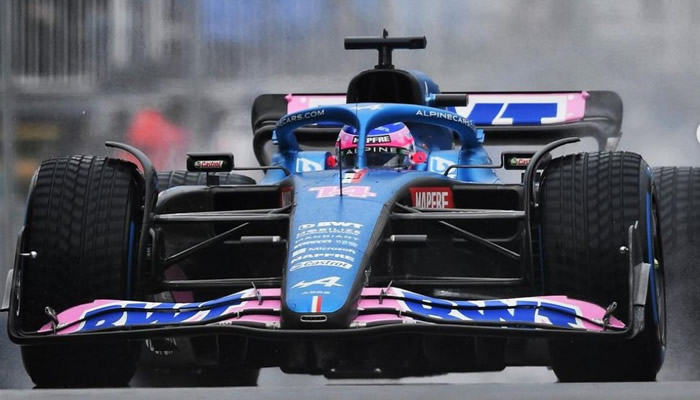 Image of Fernando Alonso driving his Alpine to second spot on the grid in Canada. Credit: [email protected]_oficial

Fernando Alonso drove his Renault Alpine in spectacular fashion in the final qualifying session on Saturday, June 18, to claim second place for today’s Canadian Grand Prix at the Circuit Gilles Villeneuve in Montreal.

This is the first time that the Spanish former world champion has achieved a front-row start since 2012 in the German GP, while driving for Ferrari.

In a rain-soaked session, current world champion Max Verstappen took pole in the Red Bull. He controlled the session from start to finish, finishing 0.645 seconds clear of the Alonso as the track changed from wet to dry.

Carlos Sainz entered another brilliant drive in the Ferrari to claim third, with Lewis Hamilton bringing his Mercedes home in fourth. Ferrari’s other driver – and Verstappen’s nearest rival – Charles LeClerc, never even took part, and was demoted to 15th spot on the grid. The Frenchman picked up a penalty for using too many power-unit components.

George Russell had been in the running for another top-four place on the grid, but a costly decision to run with dry-weather slick tyres saw him eventually end up down in eighth.

Another impressive display saw both Haas cars clinch the American team’s best-ever result in qualifying. They will start in fifth and sixth, as Kevin Magnussen and Mick Schumacher pulled brilliant performances out of the bag.

An engine problem saw British driver Lando Norris unable to complete his qualifying lap, and he ended up in a disappointing 14th place. Alex Albon, the British-born Thai drove his Williams to an exceptional 12th place on the grid.

Jump onboard with @alo_oficial for his magic P3 lap in first practice ✨#CanadianGP #F1 pic.twitter.com/cLmuWKa2kf