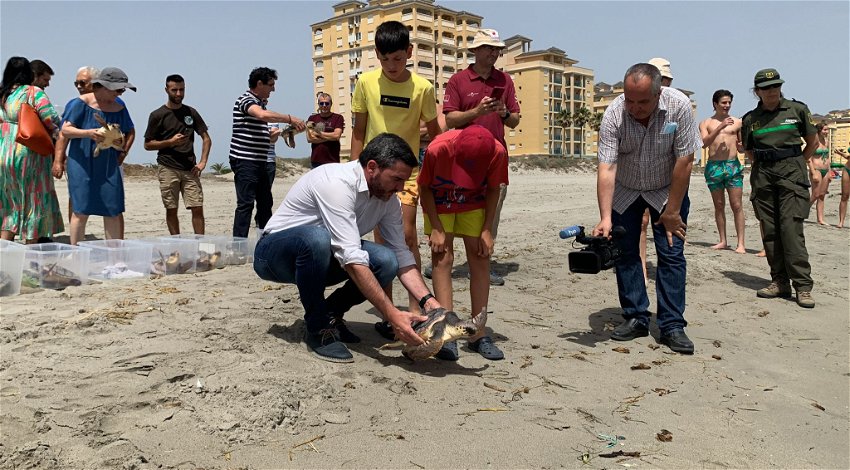 SETTING OUT: One of the turtles released in La Manga on June 16 Photo credit: Oceanograic Valencia

A YOUNG loggerhead turtle, raised in captivity and released in La Manga (Murcia) on June 16, keeps returning to the shore.

It reached the Cabo Roig Marina in Orihuela Costa a day later, before travelling on to Cala Mosca and finally Torrevieja where it arrived on June 18.

The turtle was one of 12 hatched from eggs found two years ago on the Ensenada del Esparto beach in San Javier (Murcia) and taken to the Oceanografic Aquarium in Valencia.

There they remained until now, part of a programme known as “head-starting” to give the endangered species a better chance of surviving in the open sea.

When the home-loving turtle was spotted in Cabo Roig, it was picked up by the maritime authorities and returned further out to sea.

Undeterred, the turtle was later observed in Cala Mosca, swimming very close to the shore, forging ahead until it reached the Los Naufragos beach in Torrevieja.  Here it was seen by two swimmers who warned the lifeguards.

They in turn contacted Torrevieja’s municipal biologist, Juan Antonio Pujol, who alerted the Policia Local’s Environment Unit as well as the University of Valencia team monitoring the turtles and Oceanografic biologists who confirmed that the turtle was one of the 12 La Manga turtles.

It has now been released far out to sea, well away from the dangers posed by launches, motorboats and jet-skis.

A close watch will nevertheless be kept over the next few days to check whether the turtle returns to the shore, Oceanografic sources said.