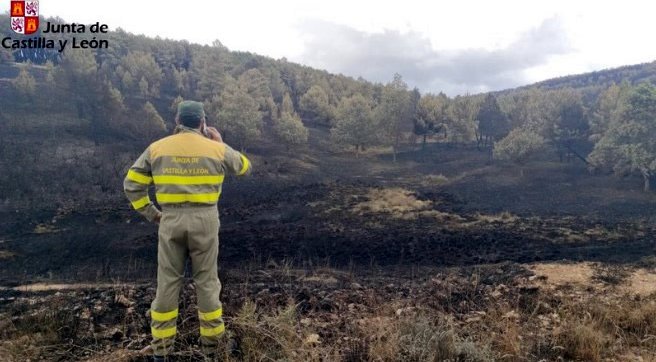 Image of the burned area in Zamora. Credit: [email protected]

Catalonia, Aragon, and Extremadura are all fighting to contain fires that have broken out in the last few days. Castilla y Leon is suffering its worst fire in four decades, which broke out in the province of Zamora.

The good news reported from the government of Castilla y Leon today, Sunday, June 19, is that a temperature drop has allowed residents near the Sierra de la Culebra, the focus of the fire, to return to their homes. After being closed off due to the blaze jumping across it at various points yesterday, Saturday, June 18, the N-631 has reopened.

Inhabitants of 20 towns had been evacuated as the fire encroached on them, but as of 8am today, the Guardia Civil allowed the residents of 18 municipalities to return home again.

Adif carried out the necessary checks to be able to put the Madrid-Galicia AVE railway line back into operation.

Thanks to the drop in temperatures overnight, the firefighting teams have had their task lightened. The only danger now is that strong winds are being predicted for the region which can only complicate things again.

First thing this morning, the aerial means returned and continued to attack the blaze from above. According to the latest estimate made late yesterday afternoon, Saturday, June 18, around 25,000 hectares have been destroyed.

Ground crews reportedly worked tirelessly during the night together with some of the daytime teams extending their shifts to stay until dawn. Their focus is to stop the advance of the fire and protect the evacuated populations. After already exceeding the limits of the Sierra de la Culebra hunting reserve, the blaze currently extends to the Tera river valley.

The Forest Fire Reinforcement Brigade of Tabuyo del Monte of Leon, this morning managed to extinguish a four-kilometre front in Junquera de Tera. They finally retired at 1:45am, while the Laza Brigade from Orense extended its work until 3:15am.