Worldwide macro-fraud operation snares 80 detainees, with one base in Malaga 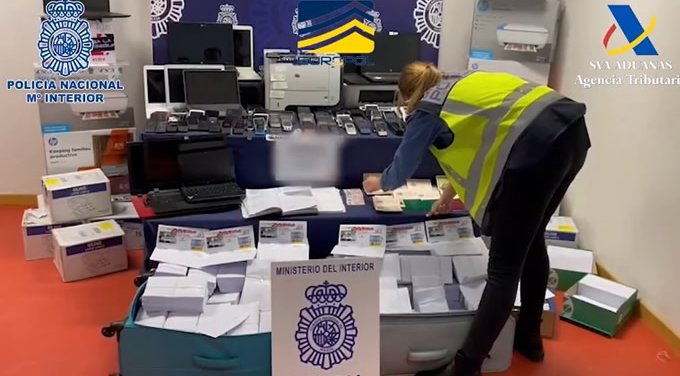 A worldwide operation has smashed a macro-fraud organisation, with one base discovered in Malaga.

As reported in a statement on Saturday, June 18, by the General Directorate of Police, an operation carried out involving the National Police has broken up an organisation responsible for an international macro-fraud involving possibly as many as 1,000 elderly victims. They were all mainly retirees from the US, who believed they had won the lottery.

‘Operation Brooklyn’ culminated in the arrest of 61 people in 24 raids in Spain. These took place in the provinces of Madrid, Barcelona, ​​Malaga, and Santander. In Madrid, they hit the Madrid municipalities of Parla and Fuenlabrada, while in Malaga, the municipality of Benalmadena, according to laopiniondemalaga.es.

Another 19 were carried out in Portugal and the United Kingdom – where the organisation had branches – as well as in the United States and Mexico.

This was a joint operation in collaboration with the Customs Surveillance of the Tax Agency, and Europol, as well as American Portuguese, and British security forces. The detainees were taken to court as allegedly responsible for the crimes of fraud, document falsification, money laundering, and belonging to a criminal organisation.

Investigations were initiated at the end of 2019 when parcels from the US were detected with large amounts of money hidden inside magazines. It was discovered that a printing shop had been hired in the Madrid municipality of Fuenlabrada to mass-print letters simulating lottery or other prize winnings, as well as unclaimed family inheritances.

They were printed in two ways, either with the names and surnames of the victims, or, in a general way. The gang would then acquire individualised labels with personal data and addresses to place them on the envelopes.

After this, they were moved to Portugal in suitcases via passenger cars or buses to send them en masse, since the cost of the service was lower than in Spain. The researchers calculated that the approximate cost of all the letters sent could amount to €500,000.

The victims, – always elderly and retired people – contacted the telephone number that appeared on the letter. It asked them to fill out a small questionnaire to find out their purchasing power, deceiving them into believing that they had been the lucky ones.

Potential victims were informed that in order to claim the prize they had to pay an initial amount for fees and bureaucratic taxes, with those affected having to pay between €1,000 and €30,000.

A system of concealment was operated by the gang that consisted of ordering its victims to remit the alleged payment of the fees by wire transfer to another potential victim. The latter was made to believe that they were being loaned the money so that they could complete his payment.

Thus, they borrowed money and, together with what they could collect, sent it in cash to a third party. This person was also a victim, who in turn sent it to a member of the organisation in Spain, who was the final recipient.

The money was hidden in magazines or catalogues that were intercepted by the Customs Surveillance Service of the Tax Agency, thanks to its controls and alerts on parcel movements at customs.

Once the gang had the money in their possession, they sent it to their country of origin through people in the network dedicated to travel, known as “mules”, hiding it in their luggage or in wallet cards.