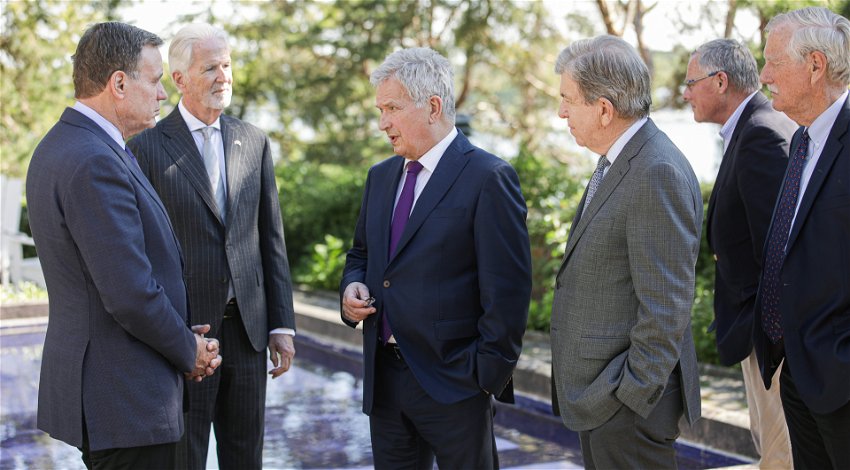 The President of Finland admitted that the country will not be able to join NATO until September after Turkey talks showed no signs of progress.

Finland has made no progress in its meeting with Turkey and will probably not be able to join NATO until September, according to Finland’s President Sauli Niinistö.

Speaking at a joint press conference in Helsinki with the President of the European Parliament (EP) Roberta Metsola, Mr Niinistö said: “In essence, there was not much progress at the meeting [with Turkey and Sweden at NATO headquarters on June 20], but we are already pleased that the discussion has begun.

“I would not like to give exact dates, but it is unlikely that we will be able to do this [join NATO] before September,” he said.

Sweden and Finland applied to join the Western defence alliance last month but have since faced opposition from Turkey.

On Monday, June 20 at NATO Headquarters in Brussels, representatives of the three countries discussed “the security concerns raised by Turkey in order to make progress in considering the applications of Finland and Sweden to join the alliance.”

“Getting an opportunity for everyone to meet is already progress, it [the organisation of the meeting] took quite a long time. We agreed that the meetings will continue,” the president added.

After Finland and Sweden simultaneously handed in their official letters of application to join NATO on Wednesday, May 18, Turkey voiced its opposition to the move.

A report from the Financial Times at the time indicated that “Turkey has blocked Nato’s initial decision to process requests by Finland and Sweden to join the military alliance.”

Citing a person with direct knowledge of the matter, the report stated that “the postponement raises doubt that NATO will be able to approve the first stage of Finland’s and Sweden’s applications within one or two weeks, as secretary-general Jens Stoltenberg indicated.”

These talks have continued and no resolution has been made.

In fact, on Sunday, May 15, Turkey’s foreign minister Mevlut Cavusoglu outlined the problem.

He said that both countries needed to lift export bans on Turkey and cease supporting terrorist groups within their own countries if they were to approve the countries’ membership in NATO.

“There absolutely needs to be security guarantees here. They need to stop supporting terrorist organisations,” Cavusoglu told Turkish reporters in Berlin at the time.