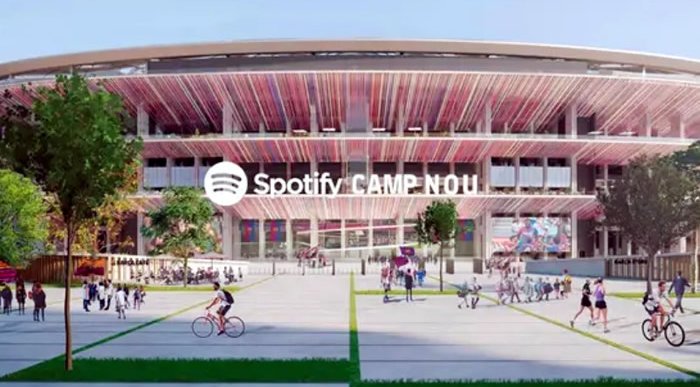 BARCELONA FC will not be playing their games at the Nou Camp for the 2023-24 season after reaching an agreement to play elsewhere while works to the historic ground are carried out.

Barcelona president Joan Laporta and Barcelona’s City Council announced on Tuesday, June 21 that the club will switch from the historic Nou Camp to the Lluis Companys Olympic Stadium for all the Spanish side’s home games in the season after next.

“FC Barcelona will play at this stadium in the 23/24 season, while work is being done on the Espai Barça, for which the City Council recently granted the license,” Joan Laporta said.

“At Barça, we are grateful to the city for helping us so much with the negotiations.

“FC Barcelona is committed to adapting the Olympic facilities and ensuring the comfort of our members and fans on match day. We will modernise various services and auxiliary spaces such as the press room, changing rooms and the indoor parking area.

“We estimate that the transfer to Montjuïc will cost Barça between 15-20 million euros.”

He added: “We are talking about the iconic venue of the Barcelona Olympics. We are talking about an international symbol of the city and we would like our season here, 2023-24, to make this stadium the epicentre of Barça supporters, shared with this great city that is Barcelona.

“All members and season ticket holders who want to come to the stadium will be able to do so by means of a democratic system on a rotation basis so that as many people as possible get the chance to be here at the Olympic Stadium.”

Barça can use the stadium between August 2023 and May 2024, and the ground will have a seating capacity of around 55,000 people.

Barcelona FC holds the right to use the facility on match days and for pre-and-post-match preparations and will also be able to use the stadium on a regular basis for training and other sporting events, including the needs of the women’s team, which this season played the quarter-finals and semi-finals of the Champions League at the Camp Nou.

According to the Spanish giants, the club’s activities will be compatible with the other cultural, sporting and civic uses of the district known as the Olympic Ring and other facilities on Montjuïc mountain.

“In all cases, care will be taken to ensure that matches do not coincide or interfere with any other event scheduled at the Palau Sant Jordi or the Esplanada Olímpica,” the club said.

The city’s deputy mayor, Jaume Collboni, said: “We are honoured to welcome FC Barcelona. I don’t think there is any better way to celebrate the 30th anniversary of the Olympic Games than this gesture of support and collaboration between the city and FC Barcelona.

“Thirty years in which it has been shown, among other things, that our city was able to manage the Olympic legacy in an excellent manner, making these spaces useful for the city and especially for culture and sport.

“This is the best possible place for FC Barcelona to spend a season. And they will be doing so inspired by the Olympic values.”

He added: “The Espai Barça is one of the most important transformations that will happen in the city of Barcelona in the coming years. It will benefit the club but also the local residents.”

On Tuesday, March 15, Barcelona FC closed an incredible sponsorship deal, right in the middle of an economic crisis after the club agreed on a four-year deal with Spotify, the Swedish online music streaming multinational, believed to be worth €70 million annually.