Tornado causes serious damage to the Aragonese town of Alcañiz 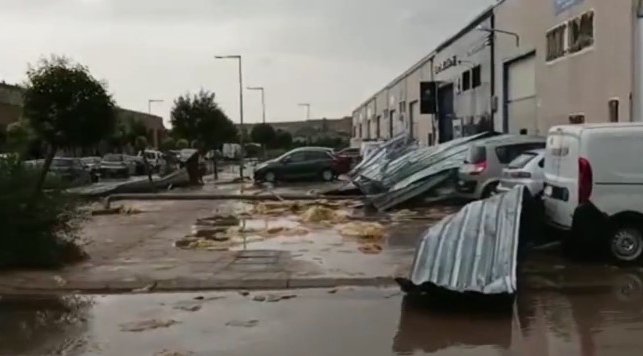 Image of damage caused by the tornado in the town of Alcañiz in Aragon. Credit: [email protected]_aragon

A freak weather phenomenon caused a tornado to destroy everything in its path in the Aragonese town of Alcañiz.

According to AEMET, the State Meteorological Agency, a weather phenomenon known as a tornadic supercell was responsible for the serious damage that occurred this Tuesday, June 21 in the municipality of Alcañiz in Aragon. One weather station in Caspe recorded gusts of 123 km/h.

A large rotation storm affected some parts of the country. Accompanied by a severe hail storm and heavy torrential rain, a tornado ripped through the Aragonese town. In less than twenty minutes, the storm destroyed everything in its path as it moved through the municipality.

Roofs were blown off buildings, containers were scattered through the streets of the town, birds, unfortunately, appeared dead on the roads, and numerous businesses suffered broken awnings as the storm suddenly appeared.

Many homes were also flooded in the huge downpour that occurred at around 3:45pm. In the few short minutes that the rain lasted, at least 31litres/m² were registered.

In the space of just ten minutes, the temperature incredibly dropped sharply, going from a hot summer afternoon of 32ºC to the recorded 18ºC.

AEMET defines this phenomenon in its glossary as a “stormy cell characterised by an intense rotating updraft, which can have a cyclonic (mesocyclone) or anticyclonic (mesoanticyclone) turn”.

Alcañiz was affected twice previously by this same type of severe weather phenomenon. Once in August 2000, and again during the hot summer of 2003.