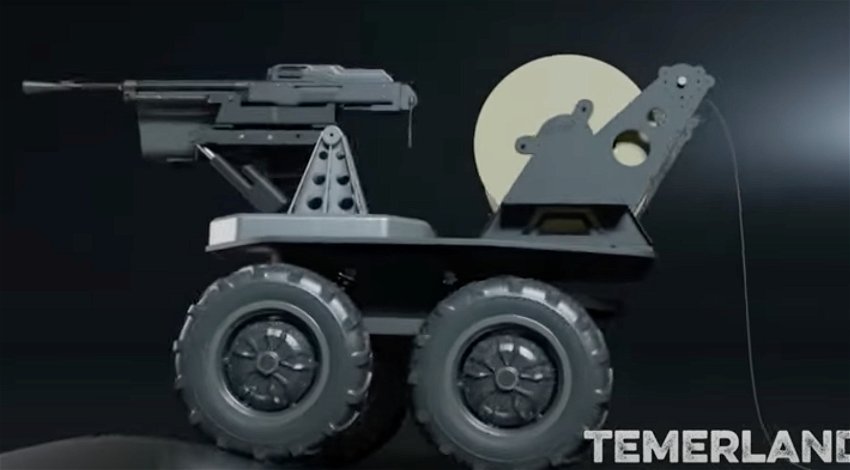 THE Armed Forces of Ukraine are set to unleash their latest weaponry to combat Russian troops as the uncrewed ground vehicle (UGV) ‘Terminator’ robots – called GNOM (“Gnome”) – get ready to enter battle.

The mini Terminator robot, no bigger than a standard microwave and equipped with a machinegun, is a reconnaissance unmanned robotic platform (GNOM) which is due to enter service in Ukraine this week.

The Wall-E-style recon robot has a 7.62 tank machine gun and its maker, a company called Temerland based in Zaporizhia, has boasted that the miniature 4×4 is jam-proof, meaning it cannot be hacked by Russian forces.

“GNOM isn’t radio-controlled and has a 2,000 meter (1.25 mile) spool of fibre-optic cable mounted on the rear that offers operators a jam-proof way to control it on the modern battlefield without being detected or signal jammed by Russian electronic warfare equipment,” according to a company statement.

Eduard Trotsenko, CEO and owner of Temerland, told Forbes on June 16: “Control of GNOM is possible in the most aggressive environment during the operation of the enemy’s electronic warfare equipment.

“The operator doesn’t deploy a control station with an antenna and does not unmask his position. The cable is not visible, and it also does not create thermal radiation that could be seen by a thermal imager.”

“While it is usually operated by remote control, GNOM clearly has some onboard intelligence and is capable of autonomous navigation. Previous Temerland designs have included advanced neural network and machine learning hardware and software providing a high degree of autonomy, so the company seems to have experience,” Forbes said.

In the video, the mini robot drives underneath a Russian tank, marked with the “Z” symbol, and deploys a 7-kg explosive charge, which the company said will destroy even the heaviest tank.

“Even getting close should be enough to damage a track and immobilise it,” the company said.

“New designs are being tested.”