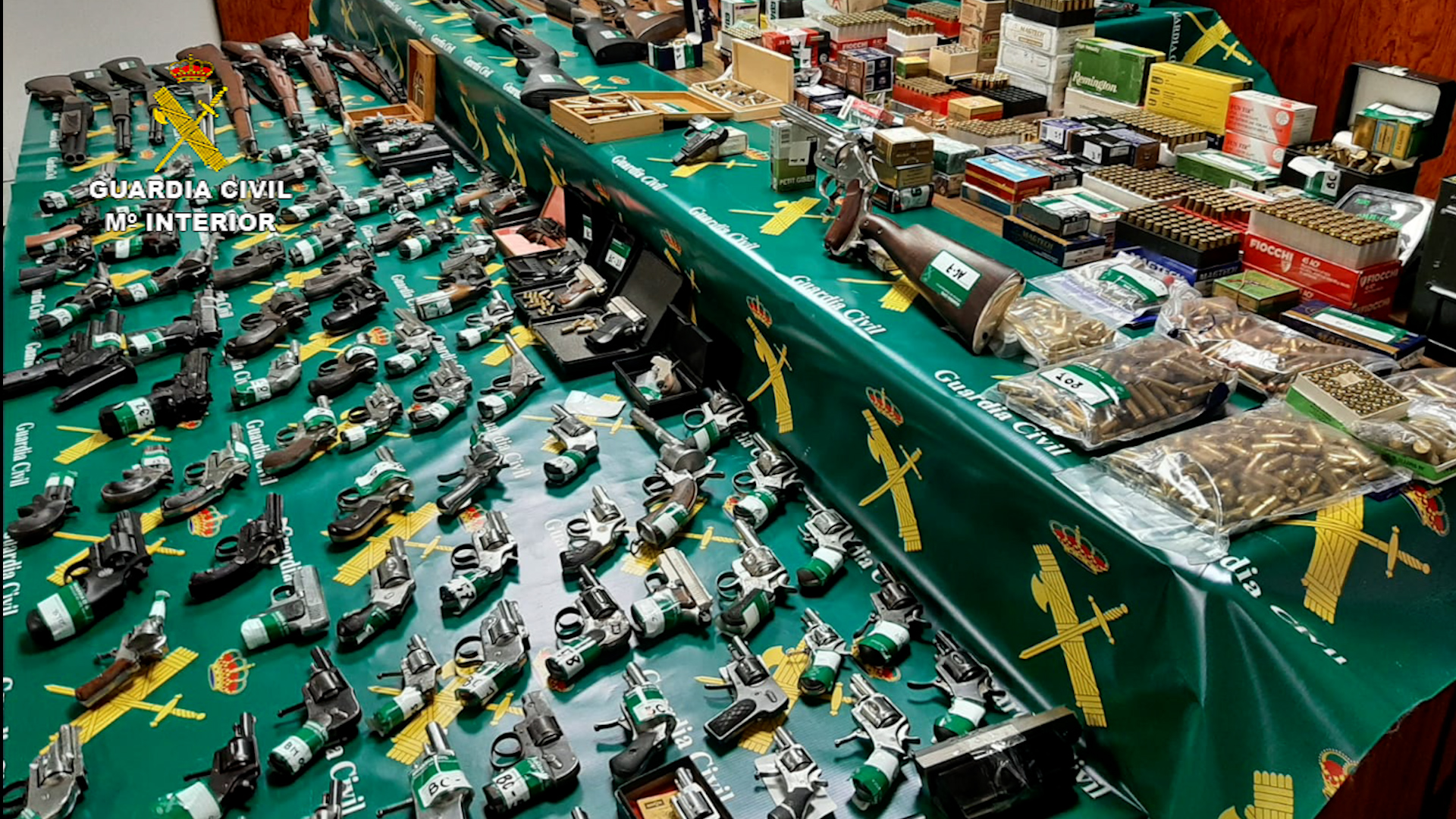 Spain’s Guardia Civil, arrested 12 people belonging to an organisation dedicated to the trafficking of illegal firearms and ammunition.

In the Guardia Civil operation that bust an illegal arms network, 17 searches were carried out across Spain in the provinces of Madrid, Toledo, Seville, Navarra, Gerona, Tarragona, Pontevedra, Lugo, Salamanca, Murcia and Melilla, with 339 firearms, 37,426 metal cartridges of different calibres, 13.2 kg of gunpowder and silencers, among other effects, seized.

The detainees were charged with the alleged crimes of arms trafficking, arms storage, weapons of war storage, ammunition storage, explosives storage, illegal possession of prohibited weapons, against public health (drug trafficking) and smuggling.
The operation began in October 2021, when Guardia Civil agents, in a separate operation, arrested in Madrid, one of the main ammunition traffickers in the country, who had sold more than 36,000 metal cartridges over the Internet and sent them to his buyers via post.
As a result of this investigation, it became clear that the individual had been engaged in the illegal activity for several years and that the buyers of the ammunition were people who illegally possessed firearms and therefore could not acquire them in authorised establishments, having to resort to the black market to obtain them.
Subsequent analysis of the documentation and computer equipment seized from the illegal supplier of ammunition led to the identification of many of his buyers, who turned out to be people in possession of unlicensed and unregistered firearms, some of whom were linked to crime.
One of those arrested in Madrid was seized with 109 firearms, most of them handguns (pistols and revolvers), including a fully functional, state-of-the-art AK47 automatic assault rifle, 11 detonating pistols converted for live fire and 4 semi-automatic pistols of completely handmade manufacture, as well as more than 14,000 rounds of metal cartridges of different types of cartridges. 000 metal cartridges of different calibres, 5.6 kg of gunpowder for the manufacture of ammunition and abundant parts and essential components for the assembly and manipulation of firearms.
Another man arrested in Toledo was seized with a huge arsenal of weapons consisting of 104 firearms (75 short, 20 long, 4 detonators converted to make real fire and 5 other prohibited weapons) and 5,936 metal cartridges of different calibres.
Many of the firearms seized by the Guardia Civil from this detainee had been illegally introduced into Spain after having been acquired abroad.
In Lugo, in addition to numerous weapons and ammunition, 2.7 kg of marijuana and 15 tusks and ivory figurines were also seized from an individual who was finally arrested in Melilla.
The Guardia Civil’s firearms operation across Spain saw the following effects seized:
– 339 firearms, including:
– 176 short arms (pistols and revolvers)
– 75 long arms (rifles, rifles and shotguns)
– 17 weapons of war (assault rifles and sub-machine guns)
– 19 detonating weapons converted for live fire
– 4 completely handmade firearms
– 39 other firearms (flobert, banned, antique, etc.)
– 37,426 metallic cartridges of different calibres.
– 13.2 kg of gunpowder
– 7,230 primers and large quantities of cartridge cases, projectiles and several reloading machines for the illegal manufacture of ammunition.
– 10,600 € in cash
– Numerous parts, essential components (barrels, bolts, frames, slides, revolver barrels) of firearms.
– Over 100 magazines, many of them high capacity.
– 2 rifle grenades and 5 tear gas grenades.
– 6 silencers
– 2.7 kg of marijuana
– 15 ivory figurines and tusks.