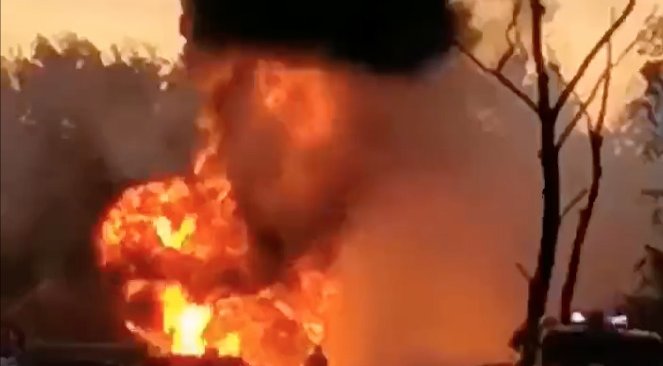 THE death toll has risen after a Russian Ilyushin Il-76 military cargo plane crashed near Russia’s western city of Ryazan on Friday, June 24.

Ryazan authorities said: “Four people died as a result of a plane crash in the area of ​​​​Mikhailovsky highway in the city of Ryazan.

“Another five are in medical institutions in Ryazan.”

Andrey Karpunin, chief physician of the Ryazan Regional Clinical Hospital said that “one of the victims is in critical condition” while two are believed to have been seriously injured. The others are said to be stable.

The Russian Ministry of Defence reported that the Ilyushin Il-76 military cargo plane was making a “training flight without cargo” when it crashed.

The defence ministry also reported that the plane was “partially destroyed by a collision with the ground” and that the “fire started at the landing site has now been extinguished.”

According to the Acting Governor of the Ryazan Region, Pavel Malkov, the “pilots took the plane away from residential areas to avoid destruction and casualties on the ground.”

Pavel Malkov said that when landing “the plane touched a power line and several neighbouring streets were left without electricity”.

“Their power supply will be restored by the evening,” he said.

ORIGINAL 7.28 am (JUNE 24) – The Ilyushin Il-76 military cargo plane – which is the main aircraft of the military transport aviation of the Russian Aerospace Forces – crashed at 3.18 am (local time) near Russia’s Ryazan city according to Russian media reports.

An IL-76 military aircraft crashed in the Ryazan region of Russia.

According to preliminary data, its engine failed and the pilot decided to land the plane on the ground. Four people died. pic.twitter.com/XJJaqi8rG7

According to early reports, the Ilyushin Il-76 military cargo plane was carrying nine passengers, three were killed in the crash while the other six were seriously injured.

The Ilyushin Il-76 military cargo plane was one of the main transport aircraft of the USSR Air Force.

Russian state-owned media suggest that the crash was due to an engine malfunction.

“During the training flight without cargo, due to an identified engine malfunction, the crew decided to land on the ground,” the Russian Defence Ministry said on Friday, June 24.

“According to preliminary data, power lines were damaged as a result of the plane crash,” a source told TASS.

As a result of the plane hitting the power lines “there was a blackout on two streets – Bibliotechnaya and Sitnikovskaya. Residential buildings were left without electricity,” the source said.

According to Baza, the military plane was flying from Belgorod to Orenburg. In Ryazan, at the Dyagilev airfield, the IL-76 landed to refuel.

Having refuelled, the behemoth took off at 3:05 am and crashed about minutes later.

Back in April, a Russian helicopter crashed in the southwestern city of Saratov, Russia.

According to Russian media reports on Thursday, April 28, the crash occurred during a training flight and killed at least one person.