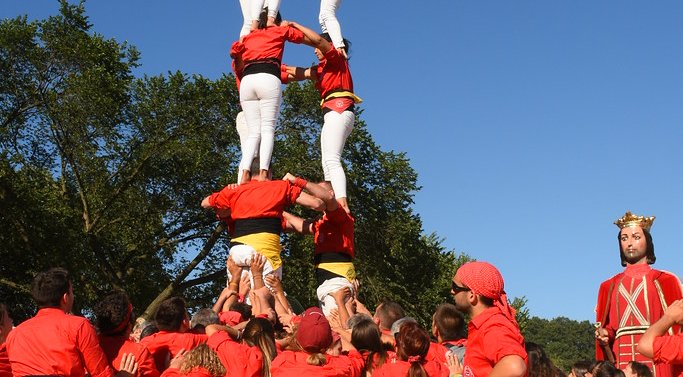 If you’re wandering round Catalonia this summer, you’ll need to watch out, not for leaning towers of Piza but for towers of people, as it’s Castell season again!

A few days after the summer solstice, June 24th was the first date of ‘mon casteller’, the part of Sant Joan festival where people climb on top of each other to form an impressively tall human tower. One of the most famous towns for this is Valls in southern Catalonia. It is also the home of the humble but delicious calcot onion, which you should try if you haven’t had a chance to yet!

Castells have been around since 1801 and were declared an intangible heritage of humanity by UNESCO in 2010. They first appeared in eastern Catalonia in Tarragona and not only look amazing but are said to resemble the cooperation of society. The tradition originates in folklore dance and the mesmerising assembling and dismantling process is usually accompanied by flute music and drums.

The Castells are divided into three parts. The pinya (the bottom of the tower) stabilises the human structure and the people at the bottom are there to catch anyone who falls. The tronc (the vertical section) is not for the faint hearted, and links the top and bottom of the tower, requiring a combination of balance, agility and strength. The pom de dalt (the top of the tower) is often comprised of children, who’s small size and light weight allows them to scale the tower up to its highest point.

Months of rehearsal time goes into practice the assembly of the tower before the big day, and massive crowds gather round to witness the breath-taking spectacle. People of all ages are often present either to help form the tower or to observe from a safe distance!