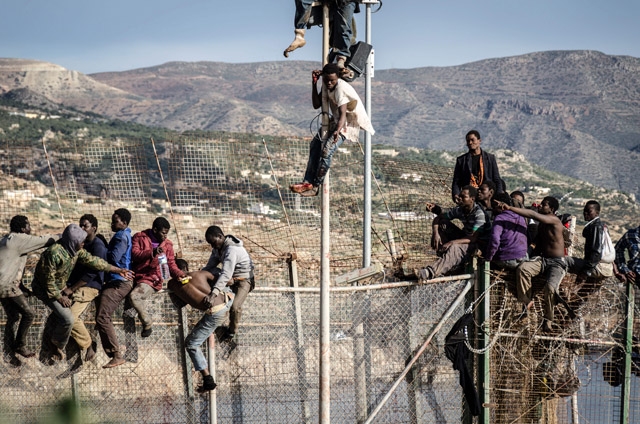 Migrants trying to cross into Spain via the North Africa enclave of Melilla resulted in a stampede that killed at least 18 and injured many others.

The migrant stampede on June 24 saw around 2,000 migrants clash with border guards as they tried to scale the steel fencing that separates Melilla from Morocco.

According to Moroccan authorities, the stampede lasted a full two hours with the injuries coming as people tried to scale the three-metre-high fencing.

In total, more than 70 migrants were injured along with 140 border guards, with the first wave of migrants attempting the crossing taking place at 6.40 am.

Hundreds of sub-Saharan Africans have broken through the border separating Spain’s 🇪🇸 Melilla enclave from Morocco 🇲🇦 and have now entered European territory.

And another thing… where are the women, children, and elderly? pic.twitter.com/6fbvwZOtWO

According to Spanish authorities, the crossing had been arranged by traffickers with around 130 having been successful in their attempts. They are currently being processed by authorities in the enclave.

Spain’s Prime Minister Pedro Sanchez suggested the “well-organised violent assault” was arranged by “human trafficking mafias”, adding that he was appreciative of the border guard’s efforts to deal with the stampede.

He said: “I would like to thank the extraordinary cooperation we are having with the Kingdom of Morocco which demonstrates the need to have the best of relations.”

The crossings are the first incursion since relations between Spain and Morocco improved in March after a year-long dispute centred on Western Sahara, a former Spanish colony annexed by Morocco in 1976.

Spain normally relies on Morocco to keep migrants away from the border, with Melilla and Ceuta, a second Spanish enclave, becoming a magnet for migrants trying to get into Europe over the last decade. Last year, Morocco loosened its controls around Ceuta, allowing thousands of migrants to cross into Spain.

Relations between the two countries had begun to thaw after Spain backed Morocco’s plan to grant more autonomy to Western Sahara, where activists are seeking full independence.

The news of the migrant stampede that killed 18 trying to cross the border into Melilla will concern many not only because of the loss of life but also because of the organised nature of the attempt that suggests more may follow.