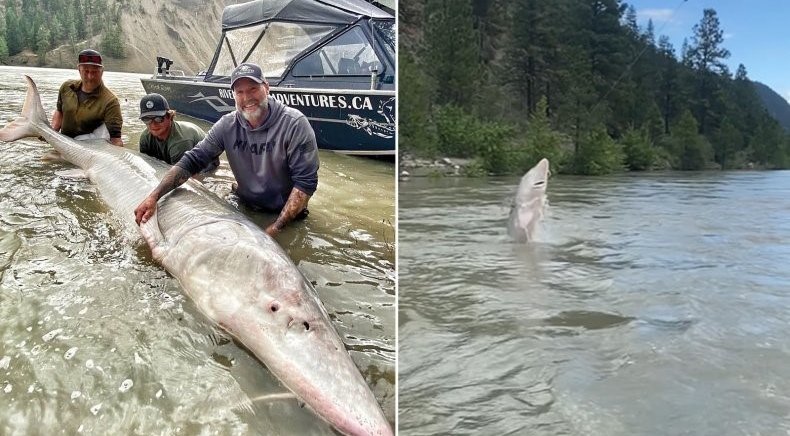 A ten-foot monster Sturgeon estimated to be at least 100 years old has been returned to the river in British Colombia where it was caught.

Caught on June 24, the monster fish took two hours to be reeled in by the novice fisherman that caught it.

Steve Ecklund and Mark Boise went on a fishing trip near Lillooet in British Colombia with guides from River Monster Adventures, Nick McCabe and Tyler Speed. The outing to celebrate Father’s Day, saw them catch the enormous fish.

Ecklund said that the sturgeon which measured 10 feet and one inch long (3 metres) and had a girth of 57 inches (1.45 metres), had not been tagged before leading the guides to believe the fish had never been caught before.

River Monster Adventures said in a post: “Our last fish of the day ends up being the largest sturgeon caught in the company’s history

“We are lost for words what a true dinosaur.”

Ecklund and Boise commenting on the post said: “The guides scoured the river using sonar equipment to help the fishermen find the biggest catch they could. Once caught and photographed, the behemoth fish was released back into the river, as has been the rule in British Columbia for the past 25 years. Violation of this law can result in hefty fines.”

Sturgeon are in decline due to poaching and habitat destruction. As the fish only breeds every few years it can take many years for the population to recover.

White sturgeon are the largest freshwater fish in North America, growing up to 14 ft (4.25 metres) long, and weighing up to 1,500 lbs (680 kilograms). According to the Fraser River Sturgeon Conservation Society, white sturgeons can also live for over 150 years.

In 2003, the Committee on the Status of Endangered Wildlife in Canada classified all populations of white sturgeon in Canada as “endangered,” but poaching continues with the fish roe (caviar) fetching up to $150 per lb (€142 per 450 grams).

Fish like the monster sturgeon are under pressure the world over with catch and tagging operations essentially in keeping tabs on the health of the population. Catching a ten-foot monster sturgeon on your first outing is also somewhat of an endangered event as stocks decline.