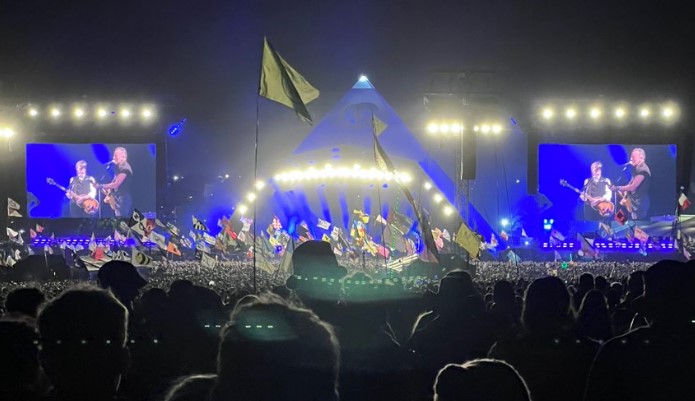 History has been made at the Glastonbury Festival as Sir Paul McCartney, aged 80, became the oldest-ever headliner.

History was made at Worthy Farm in Glastonbury today, Saturday, June 25, as the legendary Sir Paul McCartney performed on the famous pyramid stage. One week after his 80th birthday, Macca became the oldest star to ever headline the prestigious festival.

Making his first appearance there since 2004, the former Beatle entertained a crowd of thousands, including a stunning medley of the Fab Four’s greatest hits. He even played on his original Hofner bass guitar from back in the band’s heyday.

“Oh man, it’s so good to be here. We were supposed to be doing this three years ago!”, said Sir Paul at the start, referring to his festival cancellation due to the pandemic.

Sir Paul also found time to pay tribute to rock guitar legend Jimi Hendrix. Before going into a brilliant rendition of his 1973 Wings classic, ‘Let Me Roll It’, he shared a story about when the American musician visited London.

“He was a lovely man. One of the greatest tributes he ever paid us was we released Sgt Pepper as a tribute to him and he opened his show with it, he played it really well as a solo… he was really working it, giving it a lot of welly”, Paul recalled.

Not to be outdone by the other stars who had invited guests to participate, Macca pulled out not one, but two, massive names. As tweeted on the @GlastoLive feed, he brought out Foo Fighter, Dave Grohl for a special appearance on stage, and followed him with Bruce ‘The Boss’ Springsteen, sending the crowd into a total frenzy.

Today’s Glastonbury show came exactly 55 years to the day that The Beatles performed on the first worldwide satellite broadcast. They played live from the famous Abbey Road studios, representing Britain as part of the Our World TV show.

As a result, on June 25, 1967, ‘All You Need Is Love’ was heard across 24 countries by a worldwide audience of around 400 million. John, Paul, George, and Ringo were backed by a 13-piece orchestra on this occasion.

Their studio was made up of a plethora of huge stars, including Rolling Stones duo, Mick Jagger and Keith Richard, Keith Moon from The Who, Eric Clapton, and Marianne Faithful, among others.