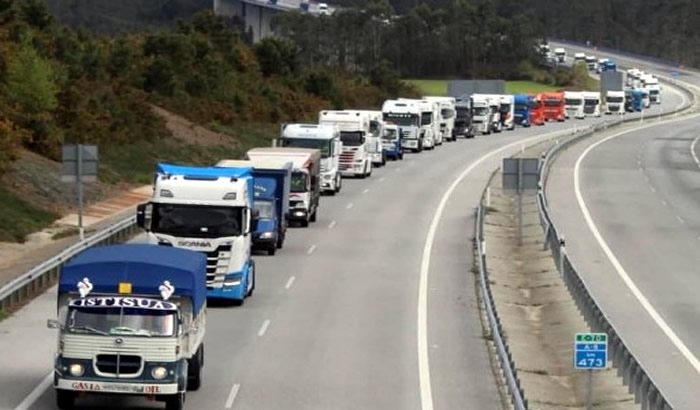 Whether the Spanish transport workers will resume their strike action on July 4 appears to be in the balance still.

The National Platform for the Defence of Transport convened its assemblies throughout Spain this morning, Sunday, June 26, to vote on whether to resume the carrier strikes in the sector from July 4.

Although the final results have not been made public yet, according to results already known to Canal Sur, it is closer than expected, larazon.es has reported. In Extremadura, the transport workers apparently voted 96-10 in favour of striking.

Aragon and Asturias voted almost unanimously not to go on strike ‘for the time being’. They are prepared to wait and see if the Ministry of Transport complies with the agreement. In Andalucia, there was total division: Jaen and Cadiz both voted in favour of industrial action, while Cordoba and Sevilla Sur voted against it, according to Canal Sur.

In Galicia, 80 per cent of Lugo carriers voted in favour of resuming the strike that was suspended on April 2. The slow trickle of results leaves all options open for the time being.

However, despite today’s voting, the carriers themselves left one last loophole open until this Thursday, June 30. Manuel Espinosa, the Cadiz delegate of the Transport Platform assured that it was almost better not to work, and to no longer trust the Government.

This margin until Thursday has clearly led several assemblies to delay their decision until they see what happens. The spokesman for the Aragonese platform, Emilio Seco, explained during the assembly: “Before, they treated us like criminals and terrorists, and now we have a chair at the dialogue table”.

The Platform acts outside the majority employers union – the National Transport Committee – which they accuse of being made up of “the directors of the large transport operators, who are mainly to blame for situations of economic abuse and labour”.

They have asked the Executive to “act responsibility and urgently, to avoid the possible collapse that will occur in transport”.

After the meeting on June 16 with the Ministry of Transport, the Platform’s board explained that, given the lack of knowledge of the exact date on which the Law that allows them to work without losses will be ready, “it becomes impossible for us to rethink maintaining any activity in the next months”.