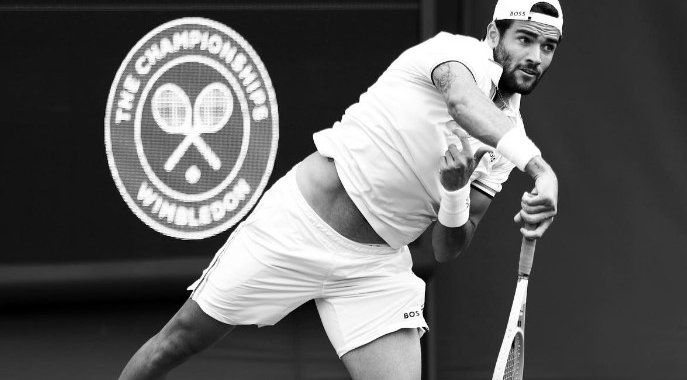 Italy’s Matteo Berrettini, the 2021 Wimbledon runner-up and a title favourite this year, pulled out of the tournament on Tuesday, June 28 after testing positive for coronavirus.

Matteo posted the sad news on his Instagram account in a post that read: “I am heartbroken to announce that I need to withdraw from Wimbledon due to a positive COVID-19 test result. ”

“I have had flu symptoms and have been isolating the last few days. Despite symptoms not being severe, I decided it was important to take another test this morning to protect the health and safety of my fellow competitors and everyone else involved in the tournament.”

“I have no words to describe the extreme disappointment I feel. The dream is over for this year, but I will be back stronger. Thank you for the support.”

The bad news comes on day two of the Wimbledon Tournament.

On day one we reported that play had been suspended due to the weather.

Just 40 minutes in and the heavens opened forcing all outdoor games to be put on hold.

Wimbledon simply tweeted a picture of an umbrella but followers were quick to comment.

One response read: “You don’t even have facilities for the tournament but you’re busy with banning players for political reasons.”

Wimbledon began today with one very notable absence. Eight-time Wimbledon champ Roger Federer will not take part in the event.

He had surgery on his right knee shortly after participating in Wimbledon 2021.

In March, Roger Federer said his most recent surgery would keep him out of action until late summer. That rules out a return at Wimbledon 2022, however, he could play at the U.S. Open which is scheduled to begin on August 29.