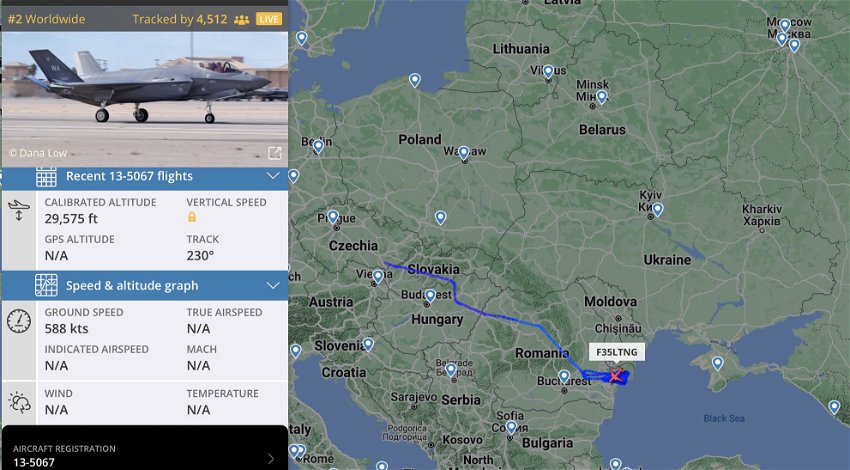 ON Monday, June 27, US forces’ F-35 fighter jets were spotted over Romania’s Black Sea after reportedly taking off from the Czech Republic.

Believed to be a warning to Russia, state-of-the-art US F-35 fighter jets were tracked over the Black Sea after setting off from the Czech Republic and flying close to Austria’s border.

According to Austrian news outlet Exxpress, despite the F-35s being stealth jets, the tracking systems were left ON so ‘Russian troops in the Donbas felt threatened.’

“The F-35 jets’ identification remained activated when they took off not far from Vienna in the Czech Republic and flew over Hungary to Romania,” the news outlet said.

“The patrol movements over Romania, directly on the Black Sea coast, were not hidden either.”

The news outlet also suggested that Russian army leaders should “now know that these fighter jets could operate near Odesa and in the entire south of Ukraine.”

The German and Swiss armed forces are also believed to be buying them.

The news that the US deliberately deployed their F-35 fighter jets so close to Ukraine will further enrage Russia, who warned that the actions of the United States in backing Ukraine is ‘reckless and irresponsible’.

The fact that Washington is prepared to deploy state-of-the-art weapons systems in the event of a further escalation of the war in Europe, as well as the weaponry they have already supplied the war-torn country, has angered some Russian officials.

Anatoly Antonov, Ambassador of Russia to the United States, said on Tuesday, June 28 that the ongoing deliveries of advanced weapons to Ukraine is a dangerous move and warned that it “creates additional risks in relations between the major nuclear powers.”

“The reckless and irresponsible process of pumping weapons into Ukraine only spins the spiral of the conflict and increases the threat of further escalation with unpredictable consequences,” he said.

“However, the ruling circles in Washington, blinded by the idea of weakening Russia, are still unable to soberly assess the danger of their steps.”

He added: “The administration is stepping up arms shipments to Kyiv. If earlier MANPADS and ATGMs had been supplied, then it came to heavy artillery, MLRS and, apparently, air defence systems.

“Moreover, Americans share intelligence with the Armed Forces of Ukraine and advise Ukrainians how to act on the battlefield.

“In fact, with its provocative steps, Washington is pushing the Kyiv regime to slaughter civilians.

“In addition, Americans are complicit in the ongoing dispatch of mercenaries from the United States to Ukraine.

“Such a course creates additional risks in relations between the major nuclear powers,” he concluded.