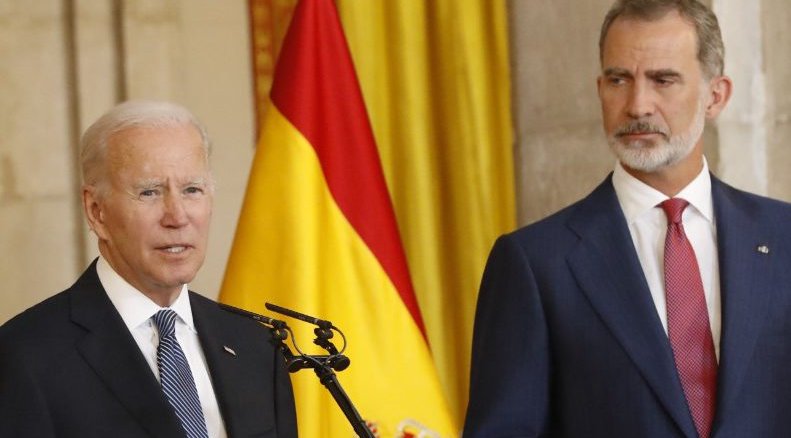 President Joe Biden was caught reutilizing his favourite joke when he greeted King Felipe and Queen Letizia of Spain on Tuesday 28 June.

This comes a year after using the same tried and tested line on Boris Johnson and his wife Carrie at the G7 Sumit last summer confirmed the Daily Mail.

When Joe Biden and his wife Jill were received by the King and Queen in the throne room of Madrid’s Royal Palace the president turned to King Felipe and said: “We both married way above our station”.

President Joe Biden arrived in Spain on Tuesday, June 28 for a NATO summit and joined his wife and two granddaughters who arrived on Sunday, June 26.

Jill Biden arrived ahead of President and started off her trip with a visit to Spanish Queen Letizia and she didn’t travel to Madrid on her own.

“I brought my two granddaughters,” the first lady told the Queen when they sat down at Palacio de la Zarzuela. ‘

Finnegan Biden was already in Spain and met up with her grandmother. Maisy travelled with Jill Biden to Spain.

The first lady and Queen Letizia also visited the Spanish Association Against Cancer. The first lady has been heavily involved in the fight against cancer since the Bidens’ son Beau died of brain cancer in 2015.

On Tuesday, Jill Biden and Queen Letizia will visit a Ukrainian refugee centre in Madrid and meet with Ukrainian families who have been taken in by Spanish families.

She and the president will attend a NATO dinner on Tuesday.

On Wednesday, the first lady will participate in the agenda for husbands of the NATO country leaders, including visits to Madrid’s Prado and Reina Sofia museums.