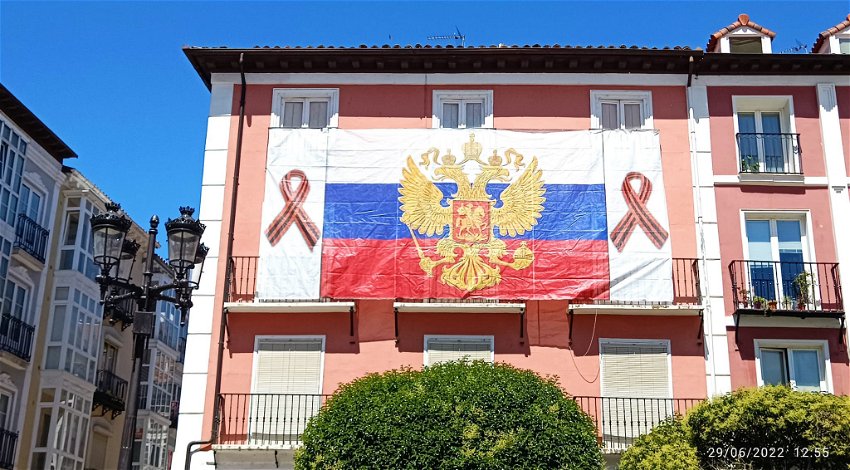 PHOTOS and videos began making the rounds on social media on Thursday, June 30 showing a Russian flag in Spain’s Burgos being removed by the local fire department.

The incident happened the day before (Wednesday, June 29) with the Russian Embassy in Spain posting pictures of the building in Burgos donned with their country’s flag.

The banner caused quite a stir, although it is not the first time it has appeared on the corner between Calle Sombrerería and the Plaza Mayor.

In fact, the Russian and Crimean flags have previously appeared in the same location, an action carried out by Eugenio Dorao, president and founding member of the European Platform of Friends of Russia, based in Castilla y León’s Burgos.

The mayor of Burgos, Daniel de la Rosa, ordered the removal of the flag, with two ribbons of the Order of Saint George on either side, from the facade of the building.

Firefighters withdraw the flag by order of the Local Police on instructions from the Burgos City Council.

Local news outlet Burgo Saldia noted that many people from Burgos and visiting tourists to one of the most visited places in the city were surprised to see the flag in the plaza and apparently applauded its removal.

The incident coincided with the NATO conference in Madrid, which saw Kyiv Mayor Vitali Klitschko and Madrid Mayor José Luis Martínez-Almeida sign a memorandum on the twinning of the two capital cities of Ukraine and Spain, on Wednesday, June 29.