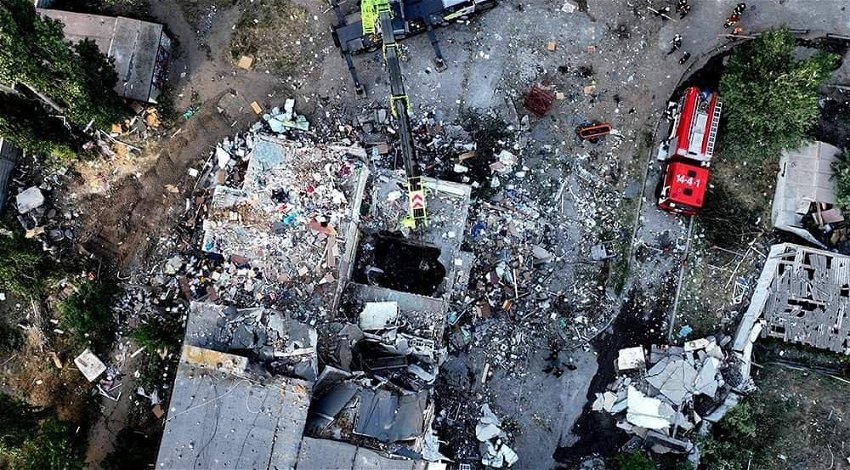 VIDEOS circulating online show the devastating impact of a Russian rocket that wiped out a five-story building in Mykolaiv, Ukraine and tragically killed six people and injured dozens more.

Six people were killed due to a Russian missile strike on a residential building in Mykolaiv, Ukraine late on Wednesday, June 29, while six others were injured, according to the Head of the Mykolaiv Regional State Administration, Vitaliy Kym.

The explosion caused the 5th and 4th floors of the building to collapse while people were sleeping, Vitaliy Kym said. While another rocket hit the garage complex, turning three dozen cars and garages into dust.

Videos show the moment of impact.

⚡️A video of today's arrival of a Russian rocket to a residential building in Mykolaiv was published on social networks. pic.twitter.com/3LeQ3i924w

According to reports from Ukrainian media, the cruise missiles that struck the residential area of Mykolayiv were fired from the Black Sea.

“300 kilograms of the warhead hit the side of a nine-tower building, the 5th and 4th floors collapsed,” reports read.

All windows and flats in the neighbouring buildings were shattered by the blast.

In the aftermath of the strikes, videos emerged of a dog being rescued from the fourth floor of the destroyed building.

A "terribly scared" Labrador was rescued from the fourth floor of a building in Mykolaiv, Ukraine after the town was hit by a missile strike.

Another rocket hit the local sports stadium the day before, according to Volodymyr Kose, the stadium director.

The brand new European sports complex had only recently been renovated after a four-year reconstruction had finished.

“There are no troops here, only civilians. Our work has stopped, you saw our office, it is simply not there. Damaged trackways completely, demolished the administrative building, which was new, all was new and the floors and furniture. Approximately €3 million,” said Mr Kose.

The news of the strike in Mykolaiv following the destruction of a shopping centre in Kremenchuk, Ukraine.