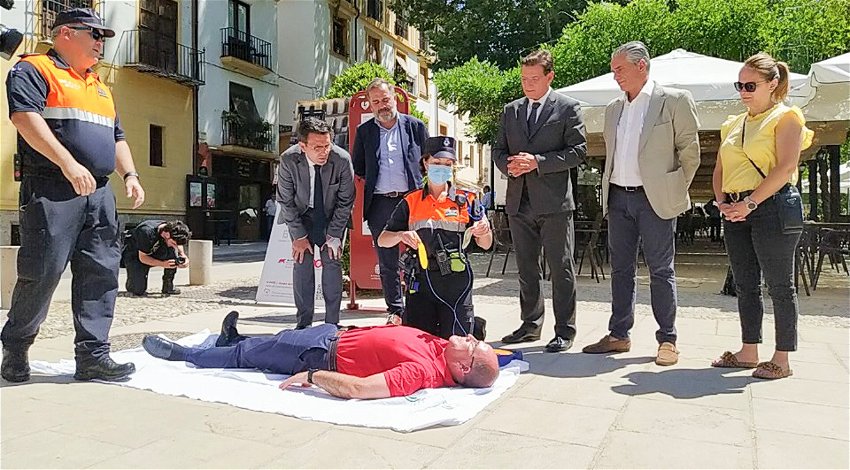 Spain’s Granada City Council has installed another defibrillator in the Paseo de los Tristes, making progress in its aim to make Granada a “healthier, friendlier and more protected” city.

The measure is part of the “Granada, cardio-protected city” project launched by Spain’s Granada City Council to provide the city with a network of defibrillators throughout the city, especially at the points with the greatest influx of people thanks to which before the end of the year there will be twelve defibrillators.

The latest installation is in addition to the two already in place in the Fuente de las Batallas and the Plaza de Isabel la Católica, which came into operation last year and have already saved lives, and to which nine more will be added before the end of the year.

The Mayor of Granada, Francisco Cuenca, announced the project on Wednesday June 29, stating:

“Granada is not only reinforcing the cardioprotection it offers its residents and visitors, but is also becoming a national benchmark for its commitment to offering maximum safety to its citizens and visitors, offering comprehensive care with which we manage to save lives.”

In Spain it is estimated that every year there are more than 30,000 cardiac arrests, which is equivalent to an average of one cardiac arrest every 20 minutes.

In turn, more than 85 per cent of sudden deaths are of cardiac origin, 90 per cent of them occur outside a health centre and only 5 percent survive without sequelae.

The time it takes to save a victim is crucial. The first 5 minutes are essential, from then on, every minute that passes reduces the chances of survival by 10 percent.

If a defibrillator is available, those chances can increase to 70-90 per cent in the first minutes. With the implementation of defibrillators outside the hospital setting, high mortality rates can be reduced and help save lives.

The news follows similar reports of life-saving defibrillators to be installed at waste and recycling centres across Hampshire, UK after two people died of heart attacks at rubbish tips in the region.