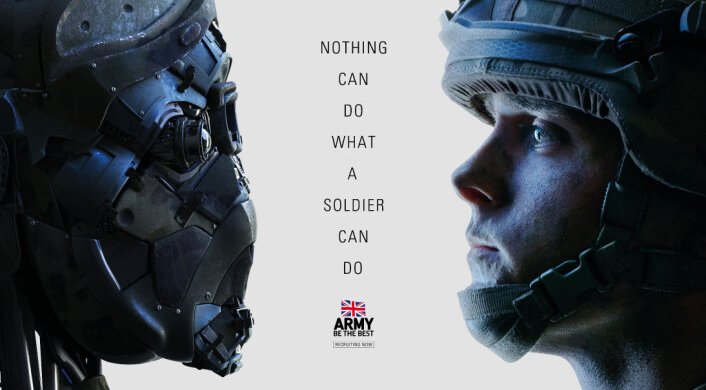 The British Army has launched a new recruitment drive featuring robots, as reported on Friday July 1.

Soldiers have been pitted against robots in the British Army’s latest recruitment campaign named “Nothing Can Do What A Soldier Can Do”, which contains the message that despite the latest technologies seen in warfare, the UK’s future of Defence will be lead by soldiers.

The one-minute video advert, set to be shown in UK cinemas, tv and online, shows a robot soldier in a dystopian future, scouting a war zone.

The clip ends with a human soldier making an instinctive decision, something which robots, as of yet, are incapable of.

The video used in the recruitment campaign is reportedly made up of 4,000 CGI elements and an additional 2,000 design samples.

“Like previous recruitment campaigns, Nothing Can Do What A Soldier Can Do aims to dispel one of the many myths that surround the British Army. This time, looking at the British Army of the future and the role of soldiers within it.”

“We want to tell future recruits that, no matter what technological advancements we make, it is the judgment, intelligence and even the wit of our soldiers that is indispensable to the future of the Army.”

“We hope the campaign will lead to potential applicants seeing the Army as an exciting place they can learn and grow, and be valued as an integral part in our future,” he concluded.

“While we live more of our lives online and increasingly in augmented realities, it’s easy to believe that the future of any armed force is now about mass robotic units managed by unfeeling AI.”

“As a former soldier, I know that will simply never be the case. Technology must work alongside the human ingenuity of soldiers and personnel – the army of the future still needs you,” as reported by GBnews.

The recruitment campaign also follows a time of great involvement of the British Armed Forces in the Ukraine Crisis, with UK Foreign Secretary Liz Truss firing some subtle shots at NATO on Thursday, June 30, suggesting that the alliance has not spent enough on defence after the UK announced more aid and weaponry for Ukraine.