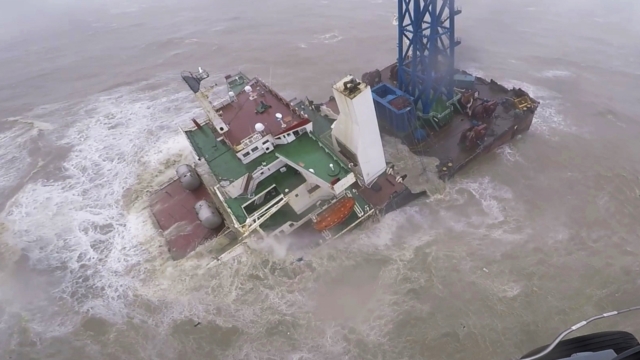 HARROWING footage shows a crew member being rescued, as dozens more are still missing after a ship was snapped in half and then sunk during severe weather caused by Typhoon Chaba off the coast of Hong Kong.

The industrial ship was sailing around 300 km, or 186 miles, to the south of Hong Kong when the tragedy occurred due to the treacherous conditions caused by Typoon Chaba.

Helicopters and planes equipped with rescue teams rushed to the scene in a bid to help the crew of 30.

Crews from the Hong Kong Flying Service (HKFS) travelled to the site in six aircraft, but as of Saturday afternoon reports indicate only three survivors of the wrecked ship had been brought to safety.

Typhoon Chaba was passing through the South China Sea when it met the vessel and the crew began to experience problems.

A video released by HKFS shows footage of the a helicopter equipped with emergency personnel approaching the ship and successfully air lifting a member of the crew to safety.

The shocking clip shows the ship being submerged by waves amid perilous weather conditions as the emergency team hauls the crew member aboard.

China’s National Meteorological Center said that Typhoon Chaba was blowing gales of 15-20 km per hour as it reached the coastal city of Maoming in the province of Guangdong on Saturday.

Gao Shuanzhu, the chief weather forecaster at China’s National Meteorological Centre said that Typhoon Chaba could cause record rainfalls in the region, but is expected to lose strength after some time.

“The abundant monsoon water vapour will lead to intense downpours and huge cumulative rainfall of an extreme nature,” Shuanzhu said.

Over 45,000 people in the Phillipines were evacuated in December, 2021, as Typhoon Rai approached the region. Twenty-two people were killed by Typhoon Goni in the islands in November, 2020.