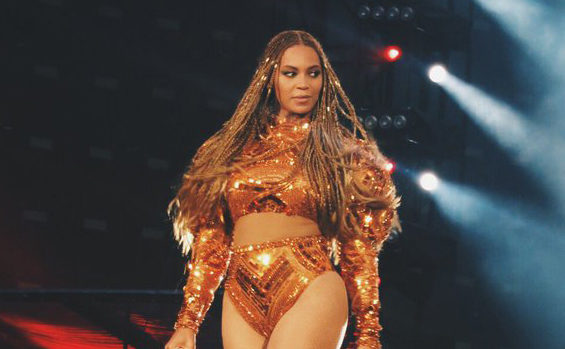 The cover of Beyonce’s new album Renaissance, revealed on 30th June 2022, has been compared by fans to 19th century painting of Lady Godiva by John Collier.

The original painting depicts a naked woman riding through Coventry on a horse in protest of her husband Leofric’s plans to impose harsh taxes on the city’s citizens, who told her he wouldn’t go ahead with the taxes if she appeared in town naked on horseback.

Shot by Carlijn Jacobs, who has also shot celebrities like Kim Kardashian,  the album cover features Queen Bey herself, wearing nothing but a spiked silverly body chain atop a silver streaked, holographic horse, staring intently and majestically out of the image. The harness itself is reminiscent of the crystal top she sports on the cover of her 2003 debut album Dangerously In Love.

It is not the first time Jacobs has featured the equine ilk in his photography, as he also photographed Bella Hadid atop a white horse back in 2021.

Fans have also suggested that the image is a reference to Bianca Jagger’s entrance atop a white horse to renowned A-list club Studio 54 in New York in May 1977.

Speaking about the upcoming release, Beyonce has expressed that her “intention was to create a safe place, a place without judgement. A place to be free of perfectionism and overthinking.” She wants her fans to feel “as unique, strong, and sexy as you are”, and as she looks atop the silverly stallion.

Beyonce‘s new album Renaissance is set to be released on the 29th July and is the first album since the iconic singer’s 2016 release Lemonade.