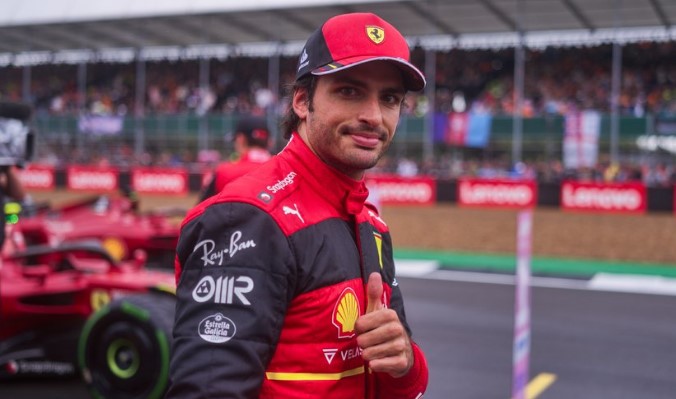 Ferrari driver Carlos Sainz made history by winning his first-ever F1 race in the British Grand Prix at Silverstone.

Spain’s Carlos Sainz made personal history today, Sunday, July 3, as he won the British Grand Prix at Silverstone. This was the Ferrari driver’s first ever chequered flag in F1, in a race marred by a spectacular, but frightening, crash involving the Alfa Romeo of Zhou Guanyu on lap one.

As the cars jostled for track position after the lights turned green, a group of cars made contact. Mercedes driver George Russell clipped the Alfa Romeo, resulting in Guanyu’s car actually flipping over. It travelled, upside down for around 200 metres, as far as the tyre barrier, which it jumped over, before landing in the small gap next to the safety fence.

The race was immediately red-flagged while stewards attempted to help the stranded driver. Eventually, the 23-year-old Chinese star was freed from his car, miraculously unhurt. He took to social media after being checked out at the medical centre, thanking the racing car’s built-in halo for his well-being.

I’m ok, all clear. Halo saved me today. Thanks everyone for your kind messages! pic.twitter.com/OylxoJC4M0

Sainz secured pole position in Q3, and tweeted his delight after taking his first pole on the Silverstone grid:

🇬🇧 Extremely happy! First pole, at Silverstone, in the wet! It was extremely tricky out there but a final good lap gave us pole. Weekend is not over, but I’m ready for tomorrow and we’ll fight for the win. Let's race!

When the race finally restarted, Sainz was on pole, but he was unable to keep the lead. He twice lost the front position, first to current world champion, Max Verstappen, and then to Charles LeClerc in the other Ferrari.

A Safety Car appearing in the later stages of the race handed the Spaniard his opportunity. He regained the lead and stayed there until crossing the line for his debut win.

Lewis Hamilton had started from sixth, but after some amazing driving and battles with Red Bull’s Sergio Perez over the last 10 laps the Brit settled for third on the podium behind the Mexican.

Max Verstappen saw his lead at the top of the drivers’ table cut to 34 points over Perez. The Dutchman suffered structural damage to his Red Bull, followed by a puncture, that kept him in the pits longer than expected. He finished in seventh place.

Next up for the F1 calendar is the Austrian GP on Sunday, July 10. This race will feature another sprint race to decide the grid positions.