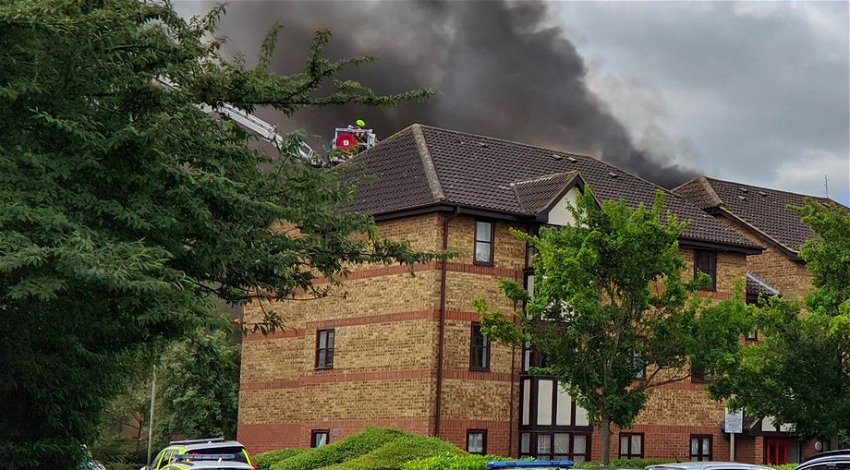 One person has died and three others, including a fireman, have been injured in a HORRIFYING fire at an apartment complex close to London after a “huge” gas explosion in Bedford, UK on Monday, July 4.

Fire engines rushed to the scene at Redwood Grove in Bedford, around 80 km (50 miles) from the UK capital London, after reports of the giant gas explosion and blaze reached the emergency services.

Police later confirmed that one person has died and three people have been admitted to hospital, including a fire fighter who was tackling the blaze that caused the building’s roof to collapse.

‘Very sadly we know that at least one person has passed away in the explosion today,’ Bedfordshire Police Chief Superintendent John Murphy said.

‘There is a possibility that there will be more fatalities discovered in the coming days as we continue to search through the scene and a number of people, as my colleague from the fire services has identified, were injured as well today.”

Authorities originally said that one person was taken to nearby Addenbrooke’s hospital with serious injuries.

“An adjacent block of flats has also been evacuated and we are working to get people back in their homes as quickly as possible,” said Bedfordshire Police.

Officials advised people to avoid the area and for those living nearby to remain inside with the windows and doors closed.

Bedfordshire Fire & Rescue Service said in a statement that firefighters are “currently in attendance at a major gas explosion on Redwood Grove, Bedford.”

‘There are currently six appliances, two water carriers, [and] an incident command unit at the scene,” the statement said.

Authorities have encouraged evacuees and others needing support to go to an emergency centre setup nearby in The John Bunyan Centre.

Adam Fisher, who lives nearby, said he heard “a huge explosion” before seeing the flames and black smoke rising from the block of flats.

“Everyone went to our work car park to see what was happening,” he said.

“Our building is adjacent to the apartment complex – immediately an inferno [was] visible, huge smoke cloud billowing, people screaming and people frantically calling for emergency services.”

Another eyewitness said that the apartment complex became “a raging inferno” after he heard a loud “boom” from the site.

The news comes as reports broke earlier in the day that a Russian ammunition depot in Yakovlikva, Kharkiv region, Ukraine caught fire.

Another large fire broke out at Europe’s largest paper mill on Thursday, July 1.