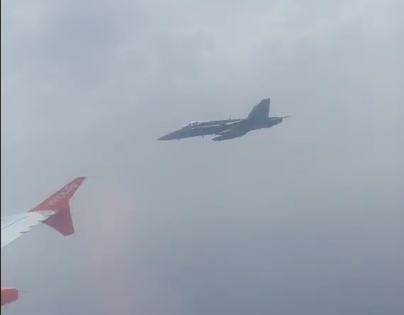 A British man has been arrested after making a bomb threat that saw an EasyJet flight from London escorted into Menorca Airport by Spanish fighter jets.

Air traffic controllers in Menorca sprung into action after being alerted to the bomb threat on flight EZY8303 from London’s Gatwick Airport on Sunday, July 3.

The scary scene of a fighter jet flying alongside the EasyJet’s wing was recorded by passengers after the bomb threat by an 18-year-old British tourist travelling to Menorca with a group of friends.

Local police entered the plane with sniffer dog’s upon its touchdown in Menorca and arrested the British holidaymaker.

Passengers had to remain on the plane for four hours while police completed their search operation.

@easyJet #a319 G-EZAO intercepted by Spanish Air Force on way to Menorca. passengers not being allowed to leave yet. @BigJetTVLIVE @BBCNews @SkyNews @SkyNewsBreak pic.twitter.com/MTWkQnU39x

A statement released by Spanish police revealed the man made the bomb threat in a social media post.

“The Civil Guard has arrested an 18-year-old British national as the alleged author of a crime of public disorder in Mahon in Menorca,” the statement said.

“Yesterday the control tower at Menorca Airport was alerted to a bomb threat on a plane heading from London to the island capital Mahon which was still in the air and nearing the airport.

“The threat was said to have been sent on a social media platform.

“Once the plane landed it was taken to an area away from the main terminal and other aircraft.”

The plane’s return flight to London was delayed by two and a half hours after authorities performed a full inspection after being accompanied into Menorca by Spanish Ariforce F18 fighter jets.

“The Civil Guard organised a special operation which consisted of mobilising bomb disposal experts as well as sniffer dogs and other officers who created a safe perimeter around the plane,” the statement said.

“The passengers were disembarked and established protocol followed until police were able to confirm it was a false bomb threat and the person responsible was identified on social media along with five other companions as witnesses.

“They were taken to a police station so officers could clarify the situation.”

A spokesman for the airline said that extensive security checks had to be carried out after the incident on Sunday, July 3.

“EasyJet can confirm flight EZY8303 from London Gatwick to Menorca was escorted by military aircraft while landing in Menorca and delayed disembarking due to precautionary security checks.

“The passengers have since disembarked. The safety and security of its passengers and crew is always EasyJet’s highest priority and we would like to thank passengers for their understanding.”

Hoards of Ryanair and EasyJet flights have been cancelled amid ongoing industrial action called by unions in Spain representing cabin crew.