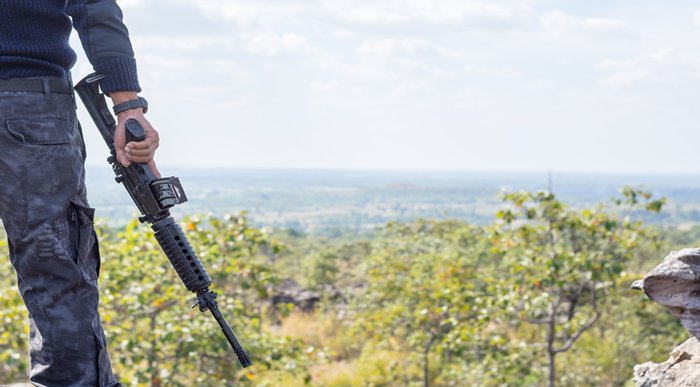 Image of a person holding a gun. Credit: Chayanin Wongpracha/Shutterstock

A Russian missile strike in Ukraine has killed Thalita do Valle, a Brazilian model who was fighting as a sniper.

Thalita do Valle, a 39-year-old Brazilian model who joined the Ukrainian military three weeks ago as a sniper has been killed in a Russian missile strike. As reported today, Tuesday, July 5, by dailymail.co.uk, Do Valle died last week inside a bunker in the northeastern city of Kharkiv while it was under bombardment.

Douglas Burigo, a 40-year-old former soldier in the Brazilian Army was also killed in the attack after he reportedly returned to the bunker in search of Thalita.

She trained to become a sniper with the Peshmergas while in Iraq, where she had joined the armed military forces of the independent Kurdistan region. This was revealed in videos posted on Thalita’s YouTube channel.

More than 32,000 views were racked up by users watching her videos documenting how she fought in Iraq against the ISIS terror group. Thalita also travelled around the world taking part in humanitarian missions, as well as working with NGOs to rescue animals.

In her younger days, Do Valle had worked as an actress and model after previously studying law. While in Ukraine, a writer was following her exploits as a sharpshooter, which were going to be eventually turned into a book.

Her brother, Theo Rodrigo Viera, told how the last time the family heard from Thalia was last week. She had just arrived in Kharkiv but explained that it was dangerous to talk much because the Russians had drones that could monitor mobile phone conversations.