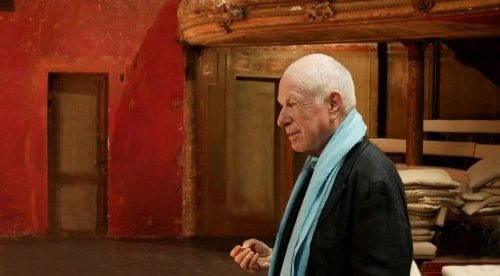 London-born theatre director Peter Brook famed for his theatre productions has died at the age of 97 leaving behind in the words of his publisher: “An incredible artistic legacy.”

Announced overnight on July 4 by his children Simon and Irina, both of whom are directors, Simon said of his father: “I am the luckiest guy in the world to have had such an amazing and loving father.”

His publisher Nick Hern Books added: “We’re honoured to have been Peter’s publisher for the past 20 years, sharing his wisdom and insights with the world.”

Brook made his directorial debut in the early 1940s before staging Shakespeare’s “King John” in Birmingham, England.

That was followed by the staging of a number of avant-garde works by Jean-Paul Sartre and Jean Cocteau before returning to direct a number of critically acclaimed Shakespeare productions starring some of the era’s greats.

Amongst those he worked with are Laurence Olivier and Vivien Leigh.

Brook went on to work with the Royal Shakespeare Company (RSC) where he gained a reputation for breaking with convention and developing an incredible artistic legacy, rejecting the classic interpretations of the time with minimalist staging, boldly sexual undercurrents and contemporary costumes that spanned cultures.

At the RSC he worked with many famed actors Frances de la Tour, Ben Kingsley and Patrick Stewart.

He went on to direct many films as well including adaptations versions of William Golding’s “Lord of the Flies” and “King Lear”.

Relocating to France in 1970 he directed many French versions of Shakespeare classics, before taking to the world stages to tell his stories. At the age of 96, he was still touring including making a visit to Mallorca, Spain.

Tributes have flooded in for Brook, who was married to the actress Natasha Parry from 1951 until her death in 2015.

Rufus Norris, Director and Joint Chief Executive of the UK’s National Theatre, said in a statement that he was: “The singular theatre practitioner of the last century, both fearless and peerless in his enquiry into the breadth and depth of the form.”

Actor Antonio Banderas said of the Emmy and Tony Award-winning director: “Brook eaves behind an unforgettable way to narrate the world around us.”

Although he had not directed for some time, Brook’s incredible artistic legacy will always be remembered as having opened Shakespeare’s works to new interpretations and new audiences.