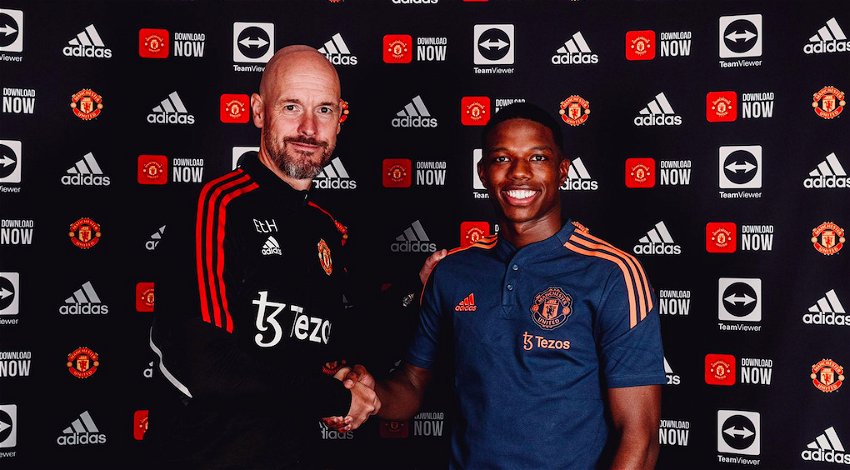 Manchester United have made their first purchase of the summer to sign left-back Tyrell Malacia from Dutch top-league club Feyenoord.

Tyrell Malacia makes the move to Manchester United from Feyenoord for a fee of €15 million, which could rise to €17 million in bonuses, as reported by The Athletic.

Malacia made 136 appearances for Rotterdam club Feyenoord, including scoring four times in 98 games in the Eredivisie, the highest division in Dutch football.

The Dutch international defender has signed a four-year contract that includes a club option for an extra season and becomes Erik ten Haag’s first purchase as Manchester United manager.

“It’s an incredible feeling to have joined Manchester United,” Malacia said of being signed by fellow Dutchman and former Ajax manager ten Haag.

“This is a new chapter for me, a new league with new team-mates and a tremendous manager leading us,” Malacia said.

“I know from playing against his teams in the Eredivisie, the qualities that he has and what he demands of his players.”

Anyone else in the mood for Malacia? ❤

Malacia is a product of Feyenoord’s youth academy and has represented the Netherlands at every age group, including five caps with the senior national side.

“Whilst I know that I am still young and will continue to develop, I can promise the United fans that I will leave everything on the pitch every time I pull on the red shirt,” Malacia said. “I’ll always be thankful to Feyenoord for all they have given to me and my family.

“None of this would be possible if it wasn’t for them. Now I’m ready to focus on the future with United, and help my new club achieve success.”

Tyrell Malacia becomes the second new player in as many days at Old Trafford after an agreement was made for Manchester United to sign Denmark international Cristian Eriksen on a free transfer from Brentford on Monday, July 4.