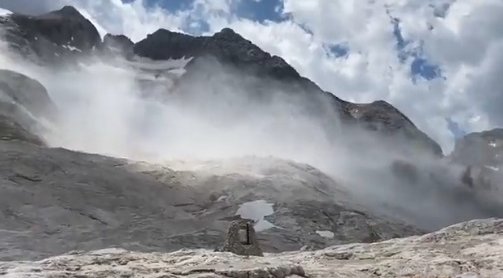 July 5: 14:56 – Rescuers working a the site of the glacier collapse in the Northern Italian Alps have said they have recovered a number of body parts.

Rescue attempts are still ongoing however treacherous conditions have made the search difficult, with the emergency services warning that further avalanches could be imminent.

The death toll has been increased to seven and 14 are now known to be definitely missing, but hopes that they will be found alive are fading with the avalanche covering hikers in snow, ice and rocks.

Some of the hikers are said to have been roped together making evacuation difficult.

Emergency services at the scene of a deadly avalanche in the Italian Dolomites recovered what body parts they could on Tuesday, with the dangers of venturing under the partially collapsed glacier slowing the search.

Rescue teams sent helicopters and drones up for a second day after Sunday’s disaster, which saw at least seven hikers killed when a section of the country’s largest Alpine glacier gave way, sending ice and rock hurtling down the mountain.

Italy has blamed the collapse on climate change and fears more of the glacier could come crashing down have prevented access to much of the area where hikers, some roped together, are believed to be buried.

The Trentino Alpine Rescue Service has said: “Operations on the ground will only be carried out to recover any remains discovered by the drones, to ensure rescuers’ safety,” adding that experts were undertaking surveys to ascertain whether it was safe to send sniffer dogs in to scour the area.

“Important finds, not just bones, are first photographed, then recovered and put onto a helicopter” and flown to Canazei to be “catalogued and placed in cold storage.”

Hopes for finding further survivors are said to be fading but rescue operations are set to continue with authorities having said they will do all they can to recover the missing.

July 4: 11:41 – Italian Prime Minister Mario Draghi today visited the avalanche site in the Italian Alps where he expressed his condolences for the six dead and his thanks to those involved in the rescue operation.

On Monday, July 4, Draghi along with President Sergio Mattarella visited the area where an avalanche caused by the collapse of the Marmolada glacier left six dead and more than 20 missing.

Expressing their condolences they said that every effort will be made to locate those caught in the avalanche which occurred some 3,300 metres above sea level in the highest part of the Dolomites.

Speaking about Mario Draghi’s visit, the President of the Autonomous Province of Trento, Maurizio Fugatti told Interris that: “The head of state also wanted to convey his condolences to our community as well as to the relatives of the victims. At the same time, he expressed words of gratitude to the rescuers who are doing their utmost, in conditions that are certainly not easy, in search of the victims of the large landslide that caused death and devastation yesterday afternoon.“

The Marmolada glacier straddles the regions of Trento and Veneto where unseasonably warm temperatures of 10 degrees celsius caused the glacier to crack sending snow and ice down into the valley. The area was full of hikers when the avalanche occurred, with many being buried in the snow and ice.

⚠️🇮🇹 A huge block has broken away from the #Marmolada glacier in #Alps in Northern #Italy.

Impressive images, on the path that leads to the top of the Punta Rocca. It was 10°C higher than normal temperatures.

Rescue teams are still in the area having worked overnight to locate victims using dogs and drones, with much of the area said to be unstable and dangerous for rescuers.

Rescue attempts will continue throughout the day weather permitting with the injured being removed to local hospitals and the dead to a temporary mortuary in the Canazei ice rink. A funeral home has been set up at the ice rink to allow relatives to identify the bodies.

The number of dead confirmed on Monday, morning stood at six, three Italians, a Czechoslovakian, plus a man and a woman who have yet to be identified.

🔴ITALY :#VIDEO FATAL COLLAPSE OF THE GLACIER ON THE MOUNTAIN OF MARMOLADA, THE HIGHEST IN ITALIAN DOLOMITES (ALPS) NEAR THE HAMLET OF PUNTA ROCCA!

Mario Draghi, who has visited the avalanche site and expressed condolences for lost ones, said that everything possible will be done to find survivors and to find the bodies of the deceased.