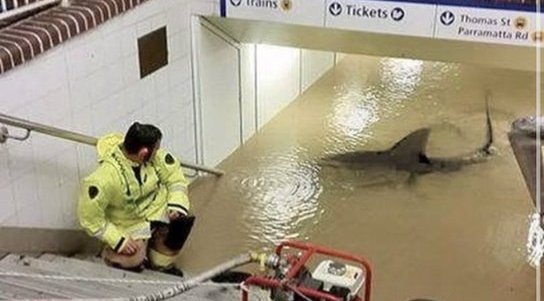 Update 11.49 pm July 6. More than 85,000 people were forced to leave homes during the Sydney floods, despite the rains subsiding.

Sydney and surrounding areas are mopping up after four days of torrential rain that equated to as much as eight months of rain in places.

Although the rain has subsided and the storm moved off rain waters remain dangerously high with many unlikely to be able to return to their homes for days.

Prime Minister Anthony Albanese told reporters during a visit to the Sydney suburb of Windsor: “This still remains a dangerous situation and we need to respond appropriately.”

He went on to announce a one-off emergency payment of A$1,000 (€666), however, it has done little to appease the frustration of those affected by the floods.

Albanese who visited a volunteer emergency relief shelter was tackled by those affected with one saying: “Everyone is talking about fixing the same problem … nothing has happened.

“The locals are always prepared, the government is not.”

The locals called the area "Gumbramorra" – meaning "the great swamp plains". Paving it over and renaming it Marrickville wasn't going to stop the water!

Devastating floods have forced more than 30,000 in Sydney and surrounding areas to leave their homes, with more torrential rain expected today.

Authorities issued a warning calling on a further 10,000 residents to leave their homes on July 4, after some 20,000 were evacuated over the weekend. The evacuation follows more than a month’s rain falling in just two days causing rivers and low-lying areas to flood.

The floods are the third this year with Sydney and others in New South Wales seeing homes submerged, bridges unusable and crops destroyed.

The Bureau of Meteorology in Australia said that heavy rains can be expected again today without about 100 millimetres set to fall over the next 24 hours. An area of around 300 kilometres along the coast from the south of Sydney up to Newcastle are all expected to bear the brunt of the storm.

With more than 200 mm of rain already having fallen warnings have been issued for flash floods and landslides, as well as significant damage to homes and property.

So with the 3rd 'once in 500 years' flood this year so far, and sharks swimming in Sydney train stations, are our conservative politicians going to agree that climate change is a real and present danger? https://t.co/2EIA001qa6

Federal Emergency Management Minister Murray Watt said that the rains that caused the floods in Sydney were the result of La Niña weather system, which he blamed on global warming.

Speaking to local media he said climate change would see Australia experiencing more and more extreme weather and that Governments needed to take the issue more seriously. Continuing he said that Australia is “under-prepared” for such events.

Speaking on ABC television he said: “The reality is we are living in a changing climate,”

Australia has mobilised the army to help with evacuations as many have been left stranded and unable to leave their homes. The bad weather has also delayed NASA’s scheduled launch of a rocket from the Arnhem Space Centre in north Australia.

The need to evacuate more than 30,000 residents from Sydney and surrounding areas will have come as a surprise to many, with those that live in the areas affected fearing for their property as the flood waters continue to rise.